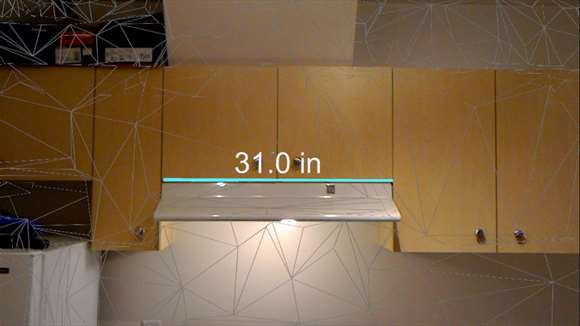 HoloMeasure allows the user to set two points with an air-tap by gazing towards objects or just by using the clicker. Then, it instantly calculates the exact distance between those marked points.

Other options include a slew of voice commands like, “inches”, “meters”, “metric” or “Imperial.” Users can use these commands to project multiple measurements at a single time, and once the project is complete, they can get rid of them by calling out “Clear.”

HoloMeasure can come handy when you need instant distance measuring between two points. The app doesn’t have a lot on offer, but it’s really interesting to see how HoloLens can be used in a field where using a physical tape may not be feasible.

More HoloLens apps to be seen

HoloMeasure is just one of many new and basic HoloLens´projects that are coming out recently. Microsoft has begun shipping the Dev Kit just eight weeks ago, and developers are still in the early stage of learning how to create software for the headset.

Microsoft itself is involved in many projects to bring practical value to the virtual glasses. This includes complex applications like in the case of the Mars Rover project together with NASA.

But the company is also working on smaller apps with practical value, such as a HoloLens optimized version of Microsoft Outlook.

How Hololens exactly works remains a well-kept secret and also the hardware specs have been unknown until just one month ago.