While Microsoft’s Magic Mirror will not tell you who is the prettiest of them all, it will help you stay more connected thanks to Azure and the company’s artificial intelligence. You may remember the company discussed it smart mirror concept at the BUILD 2016 conference this year, and now the company has expanded on the idea in an official blog post.

The company likens if magic mirror idea to the kinds of connected one-way mirrors that have been seen in Hollywood sci-fi movies. It’s the kind of smart mirror that gives you information like a screen but still letting you check if you are putting your tie on correctly in the morning.

Sure, it may seem like a pretty unnecessary tech, but Microsoft says it would mean people do not need to look at a phone or TV when getting ready in the mornings or at any other time. So, it is very niche then. The interesting thing about Microsoft’s post is that the company says it is easy for individuals to build their own relatively affordable Magic Mirror.

This is hardly a trail-blazing concept, but Microsoft is presenting one of the more realized implementations of this kind of technology. The Project Oxford AI development team and Azure cloud services can work together to tailor information to the individual user, using facial recognition to give customized info from Microsoft services. 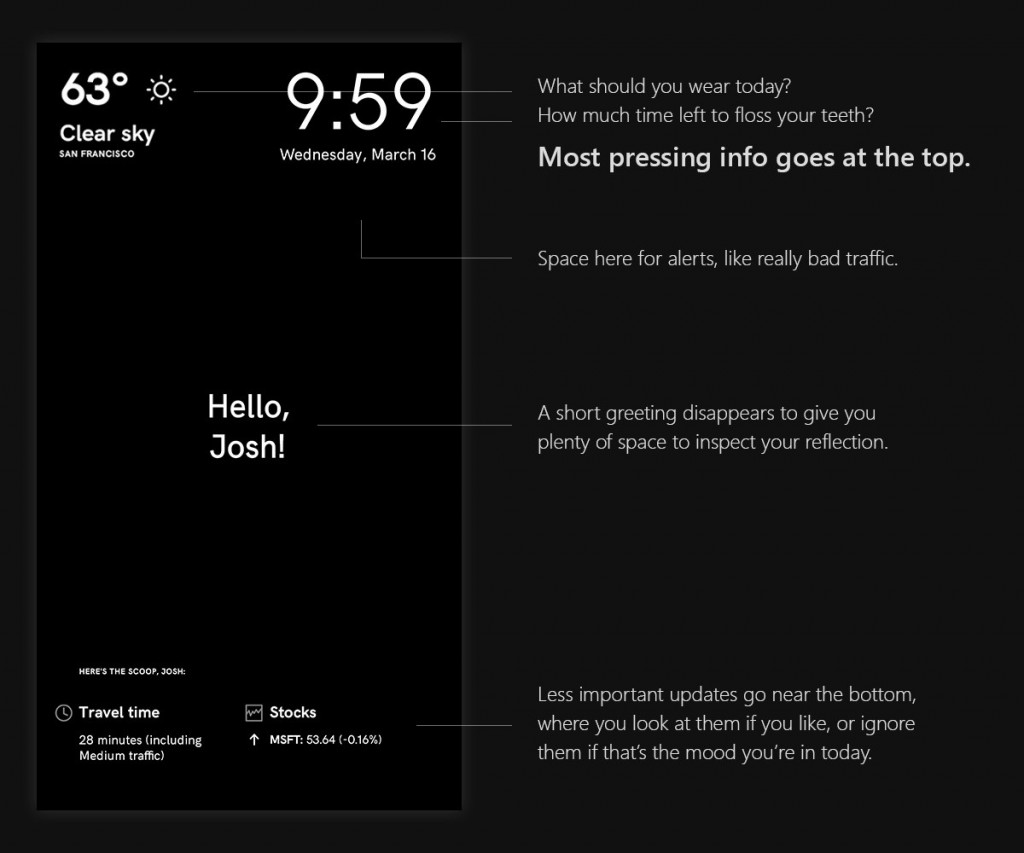 The company says making your own Magic Mirror is as easy as placing an LCD screen displaying white UI elements with a black background while mounted behind a mirror. This is achieved with a custom UI created by Microsoft, a simple system that uses snippets of info, weather, and the time almost like a smartphone notification UI:

“When the display is on, you can see both your reflection and the white elements, allowing software to present relevant information while you get ready for the day.”

Obviously, this is Microsoft having a bit of fun and showing off how its technology can be used for numerous different applications. Indeed, the company says shows with imagination and Hosted Web Apps platform and Cognitive Services APIs, that a lot is possible. The Hosted Web Apps bridge was used to make the web app a Universal Windows application running on Core IoT and Raspberry Pi.

The Magic Mirror highlights some of Redmond’s cutting-edge technology, including a webappHTML, CSS, and JavaScript and served from a Node instance hosted on Azure. Microsoft Cognitive Services provided the APIs for the facial recognition, which lets the smart mirror tailor information to individual users.

“Once they’ve created a profile, the user can stand in front of the magic mirror, which will take a picture and request Cognitive Services for the user’s face_id. This id is then used to find the user’s profile so the mirror can present the user with relevant info.”

Yes, we called it niche, but we just know that you are thinking of making one of these … we are!