Living up to a promise it made last month, Microsoft has announced the general availability (GA) of its SQL Server 2016 relational database management system. The product has already been widely seen over more than a year of public previews and release candidates, so it is good to see the end user version finally drop.

Microsoft said last month that June 1 would be the date to set your watch by if you have been awaiting SQL Server 2016 in GA, so the company has made good on its timetable. In a blog post to announce the GA of the new SQL Server build, Joseph Sirosh said the software “simplifies analytics in the way databases simplified data management.”

“SQL Server 2016 has ground-breaking performance optimizations and efficiencies, leading to new levels of performance and scale. Modern servers can support a large number of cores with sophisticated vector instructions, can hold terabytes of memory, and provide very high I/O bandwidth with local flash storage. Optimizing for the concurrency and parallelism inherent within such servers can provide dramatic speedups at scale, and often outperform large distributed databases.” 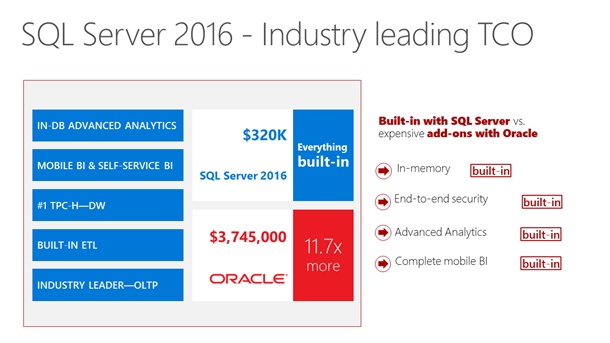 SQL Server 2016 follows on from SQL Server 2014 and SQL Server 2012, but Microsoft will continue to support those earlier builds of the software. However, in a bid to entice an upgrade or to make 2016 a no-brainer for newcomers, the company is keeping the price the same as older builds, despite the obvious improvements in the new release.

Microsoft touts a major performance upgrade and enhanced security features as the standout reasons why SQL Server 2016 should be a database choice above rivals such as Oracle. Indeed, the company points out that the software “will cost 1/10 of what Oracle software would cost for the same functionality.”