Intel has dropped its latest flagship Broadwell-E processor at Computex 2016, and it is a barnstorming 10-core i7 Extreme Edition that will offer stunning performance to gamers and those who use their machines for high processing loads.

When you put Extreme in the name of a product it had better deliver. At least on paper the 10-Core i7 6950X Extreme Edition is special and the extreme part of the name is not-too-subtle code for “this thing is blazing fast!” This is a chip that is designed for the mega-user, whether you are a hardcore 10 hour a day gamer running on multiple 8K screens or a multi-tasking hound who is on VR or editing suites all day.

The 10-core i7 is the top of the range, but there is a Broadwell-E family that comes with the following features/configurations:

The 10-Core i7 Extreme Edition is the daddy of the range, but Intel has made sure that the entire family has standout features. Turbo Max Technology 3.0 is arguably chief among them, which elects single thread tasks to a single selected core. 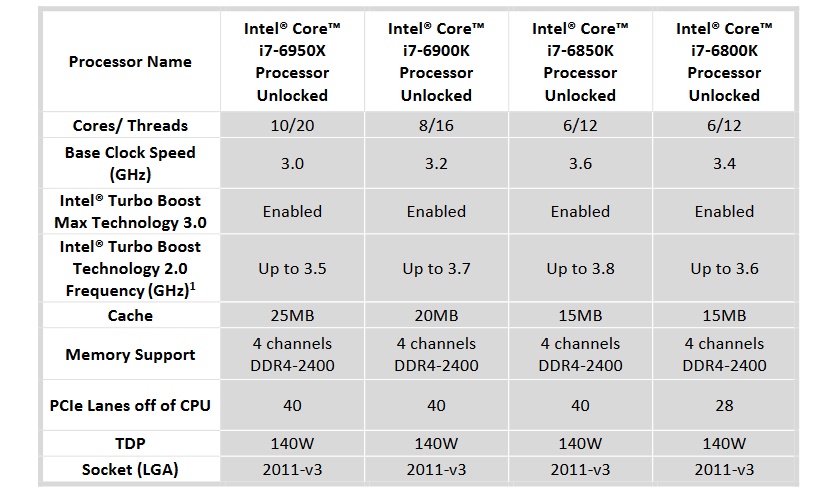 As a jack of all trades processor, the Extreme Edition will appeal to editors and gamers alike. It will easily deal with VR gaming and will also deliver optimum performance on editing and 360-video suites, even outputting to 4K screens. The 14nm silicon performs 25% better than previous chips, according to Intel.

If you are interested then the new Broadwell-E family is hitting stores right now. Intel says they are rolling out around the world and will retail from $430 (low end) to $1750 for the decked out 10-Core i7 Extreme Edition. Sure, you will have to pay a lot for this kind of performance.