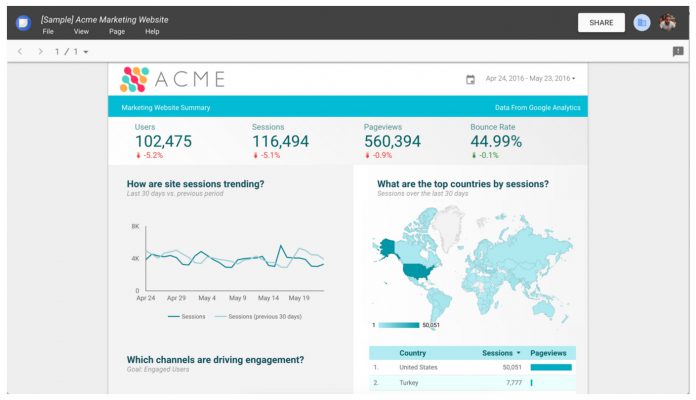 Google has announced is Data Studio 360 enterprise data management suite is now getting a free version that will compete with Microsoft’s Power BI.

Google is continuing to push against Microsoft’s services with the launch of a free Data Studio product that is an alternative to the Date Studio 360 paid suite. This is Mountain View’s response to Microsoft’s Office 365 integrated Power BI.

Data Studio 360 was launched in beta form last year as a way for enterprise teams to visualize data and create reports and graphs to pass within in a business. Google says the free Data Studio product is created to cater for smaller teams and individuals.

Differing from Power BI in Office 365, Google’s product only focuses on the company’s own services, such as AdWords, Sheets, and Analytics. The company says that eventually be available for other SQL providers, including Microsoft, but at the moment you have to be engrained in Google’s own products to use Data Studio.

The company says Google Docs can be used for real-time data management across teams within a company:

“One of the fundamental ideas behind Data Studio is that data should be easily accessible to anyone in an organization. We believe that, as more people have access to data, better decisions will be made,” Google said in a blogpost.

The free version of the software has some limitations however. Users can only able to create five reports per account, whereas the 360 (paid) version has unlimited reports. In comparison, Power BI costs $9.99 per month for 10GB, while there is a free version that gives 1GB per user.