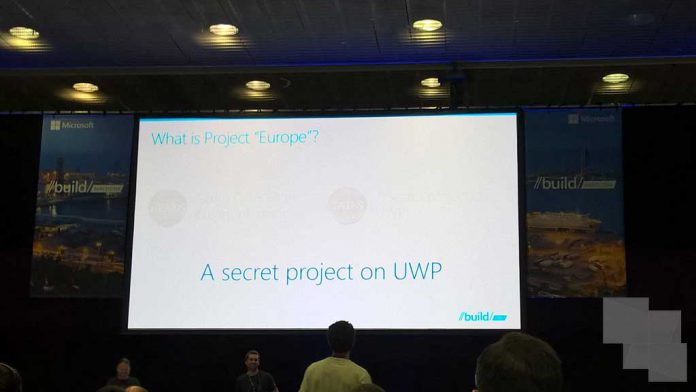 Project Europe was teased during the company’s Build Tour, although its function was not revealed it seems Europe could be an expanded concept of Project Rome.

Microsoft’s Build conference is on the road, and the Build Tour hit Barcelona this week where the company raised the curtain on an interesting new piece of tech called Project Europe. Ok, the tech is interesting purely because it is something we have not seen before, the company has not yet revealed what its precise features and functionality is.

Redmond has had a lot of “Projects” recently, including Project Centennial, Project Astoria, Project Spartan, Project Natal, Project Threshold, and more. Those features performed different (some similar) tasks, so there is no consistency to help us guess what Project Europe could be.

Early rumors suggest that Project Europe is a way for apps to pass data to each other between devices, giving users the chance to pick up where they left off across platforms. The feature would be released with the Windows 10 Anniversary Update and is part of Microsoft’s plans for a Universal Windows Platform (UWP).

Sure, the company already has a similar concept in the form of Project Rome, but it is believed that Project Europe would be an expanded and more complete version of Rome. It is worth mentioning that this is just early speculation.

While cloud is becoming Microsoft’s proverbial bread and butter, the company is not turning its back on the Windows platform, which remains a huge business. The Universal Windows Platform is viewed as the future of the platform, creating an ecosystem that lets users get the same experience on all form factors.

This ability to cross devices will means apps, productivity, entertainment, and games will be able to function across devices (PC, Mobile, Xbox, and HoloLens) without users losing any work or progress.

Let us know what you think Project Europe could be in the comments section below.