Microsoft, alongside Apple and Google, holds 23% of all corporate cash in the United States, with other companies helping the tech industry dominate corporate wealth in the country.

In terms of generating cash, the tech industry in the United States is thriving with Apple, Microsoft, and Google the top three cash-rich companies in the country. Not including financial institutions, the three giants dominate other business with a combined $391 billion in cash through the end of 2015.

That amounts to 23% of all cash ($1.68 trillion) held by all US based non-financial corporations, according to Moody’s Investors Service. Highlighting how dominant tech is as an industry at the moment, Moody’s shows that the top five cash ranking companies are tech based, with Cisco and Oracle rounding out the five.

Apple is unsurprisingly comfortably ahead of the pack with $215.7 billion in cash, while Microsoft lies in second with $102.6 billion and Google third with $73.1 billion. 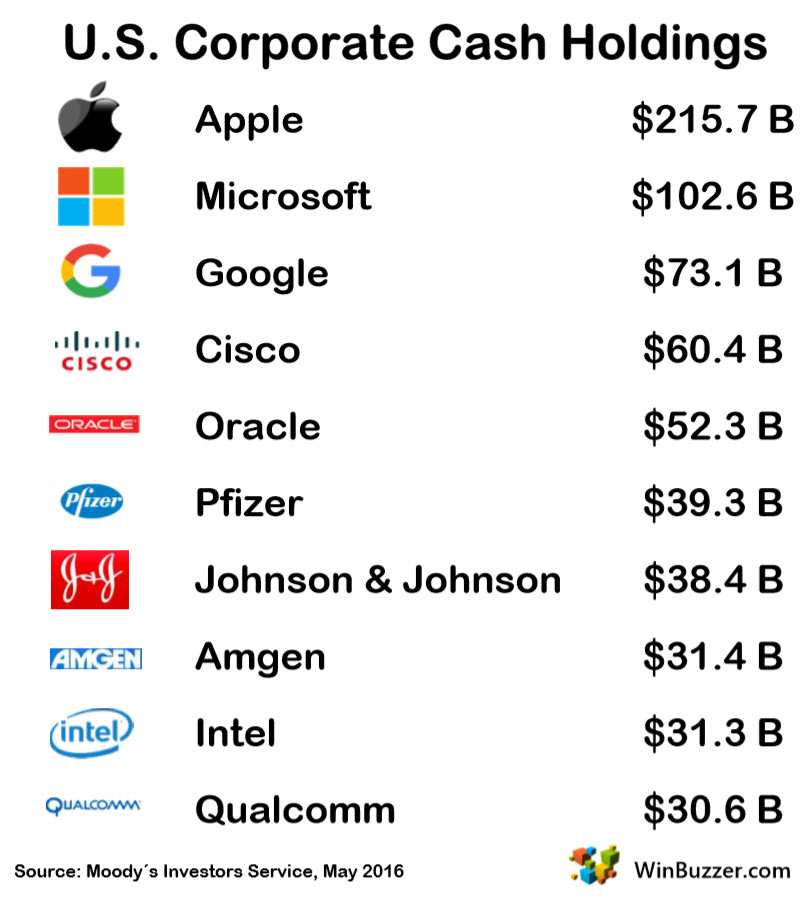 “Despite stronger returns of capital to shareholders, we expect the technology sector cash concentration will grind higher over the next year because of the sector’s strong cash flow generation,” writes Moody’s in the report. “The technology sector generated 63% of the total rated non-financial free cash flow in 2015, up from 37% in 2007. Excluding the energy sector, tech comprised 40% of non-financial free cash flow in 2015, similar to the 42% average since 2007.”

Apple’s market position is almost a given considering the company’s aggressive price margins for products and surprisingly low R&D and acquisition outlay compared to rivals. Microsoft is a much more interesting study though, especially in light of how the company’s role in the tech industry has changed in recent years.

The halcyon days of Microsoft dominating all tech companies and being accused of forming a monopoly have long gone. The company has been overtaken by changing technology (particularly mobile) and companies with clearer strategies.

After missing the mobile boom and operating almost aimlessly at the end of Steve Ballmer’s tenure as CEO, Microsoft has since rebounded under Satya Nadella. A refocused cloud base strategy and doubling down on its core services while cooling hardware aspirations has helped Microsoft regain its mojo and once again the company is truly among the tech elite.