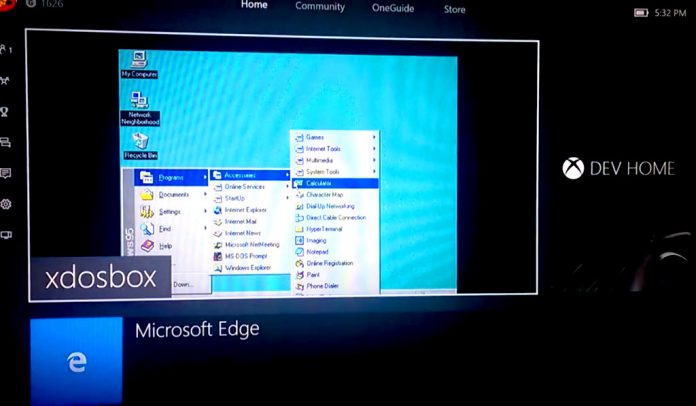 An Xbox One user has managed to run Windows 95 and MS-DOS games by using a ported version of the DOSBox emulator on his console.

The video from user vcfan shows him running Windows 95 and the MS-DOS-based version of Duke Nukem 3D his Xbox One. According to vcfan, “[The emulation is] slow for now because it’s only using the cpu interpreter. The dynarec still needs work since it produces crashes on 64bit, but it flies with it.”

As Tom Philips from Eurogamer points out, you are only be able to do this “if you have a developer version of the console. On such devices you can already load custom apps built for the Universal Windows Platform (UWP) standard, which work across Windows 10 devices.”

Microsoft released the Retail Dev Kit Unlock for Xbox One in March this year, which turns the console into a development kit. The Xbox Dev Mode allows developers to develop UWP apps and deploy them to an Xbox One.

Microsoft introduced the Xbox One’s backwards compatibility feature for Xbox 360 games in November 2015. Running DOS games on the console seems to have brought this a step even further, though this opens the possibility of further ports like SNES.

According to a comment posted by vcfan on the Youtube video page, he has yet to release binary for his project which appears to be named xdosbox. He “will update a link on this video [page] or a new video so keep a watch out”.