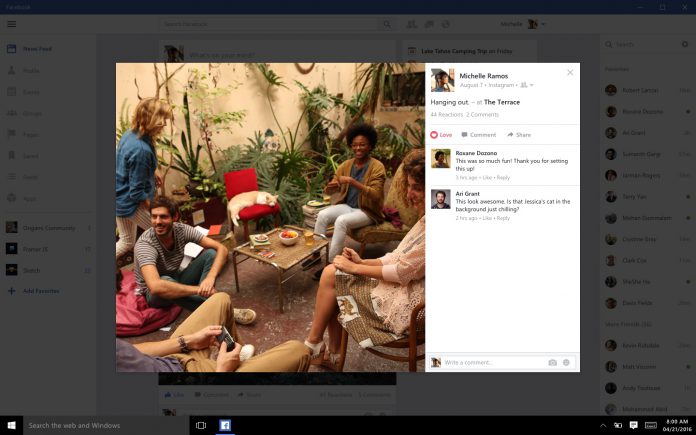 Facebook Live is coming to some Windows 10 users through an update of the Facebook app, although it seems as though the feature is only available in some regions.

The new Facebook application for Windows 10 has been given an update, moving the app to version 4.461.11637.0. It is worth noting that at the moment some users are reporting that the update brings Facebook Live to the app, although our version is not yet showing the feature … we will update if and when it does.

Facebook Live is a broadcasting feature that lets users start streams from a PC, allowing them to record and publish in real time. You may remember that the feature made its debut on the Android platform in the United States in February and was expanded to more countries for iOS, which was the first mobile OS to get Facebook Live.

Like the launch of the feature on iOS and Android, Facebook Live may only be available for the Windows 10 app in specific countries, which would explain why some users are seeing the feature and others are not.

Facebook announced its new Windows 10 application last month, but revealed that it was not a Universal Windows Platform (UWP) app at this point. The company has said it supports the UWP project though, so we expect an app that will run universally on all Windows 10 devices to come in the near future.

Other recent Facebook and Microsoft news includes the social network debuting its osquery security tool on Windows 10. Osquery is a tool that searches for suspicious content and malware through a system, it had previously been available on Mac.

If your Facebook app is now showing off Facebook Live, we would love to hear from you. Drop us a comment below and let us know which country you are in and how Facebook Live is working for you.