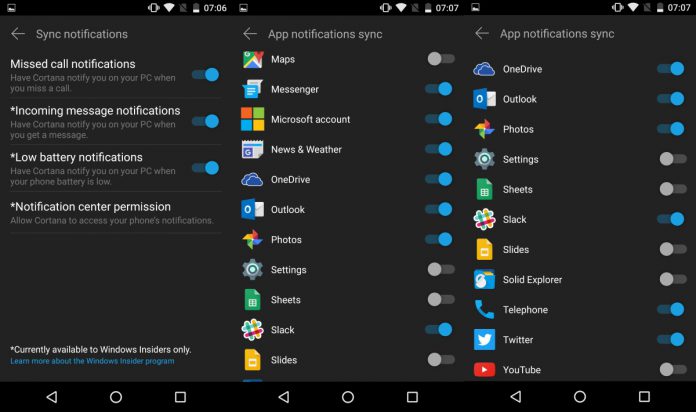 Cortana powered notifications on the Android platform were first announced by Microsoft at the Build 2016 conference in March. The feature is now starting to be rolled out to users, according to some who say the notifications are showing up on devices.

The feature gives Android devices the ability to show notifications from Windows 10 and users can then interact with them.

Jihoff80, a Reddit user, said that the feature has now been enabled on his device and was quickly followed by another user who said that he too had the feature. As he mentioned, Jihoff80 is part of both the Windows Insider and Cortana for Android test programs, so it is possible he is seeing a development build of the Windows 10 notifications for Android.

However, the second user said he is not part of the early tester programs and is also seeing the feature after downloading the APK from apkmirror.com.

Since then the feature has indeed been found in builds of Windows 10 Preview 14342, which was launched by Microsoft to Windows Insiders last week. As well as being an Insider to get this feature, you will also need to have the latest version of Cortana running on your Android smartphone or tablet, while the device will need to be running Android 5.0 Lollipop or newer.

It actually seems that this is a very robust feature as it lets users customize which Windows 10 applications they get notifications for. As you can see in the image (credit: mspoweruser) above, there are plenty of apps included for you to choose from.

Using Cortana, Microsoft’s feature allows Windows 10 notifications to be mirrored on Android devices, allowing users to dismiss them across both platforms. Whether the feature is here yet or not needs a little more clearing up, but it is obvious that Microsoft will be rolling out this functionality very soon.