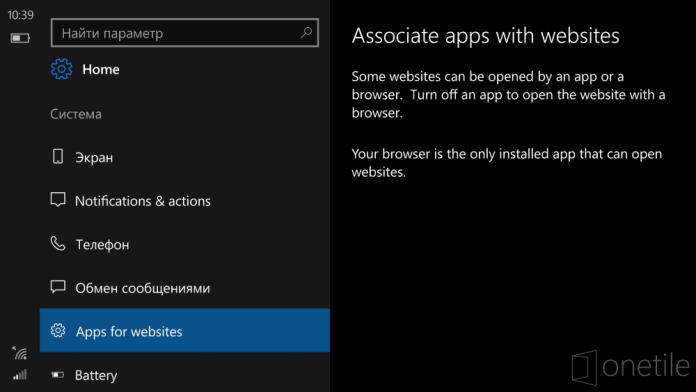 Microsoft has rolled out yet another Windows 10 Mobile preview build as the company continues to ramp up its roadmap towards the launch of Windows 10 Anniversary Update this summer. The latest preview for the company’s mobile platform is build 14342 and is available to those on the Fast Ring of the Windows Insider Program.

As we have seen in previous previews, build 14342 follows closely on the heels of the same build number that came to Insiders for Windows 10 on PCs last week.

The standout feature of the new Windows 10 Mobile preview is Apps for Websites, a feature we first discussed at the start of the month. The feature basically means that users can choose to have websites open as applications, with customization available by heading to Settings > System > Apps. In the official blog announcing Windows 10 Mobile preview build 14342, Microsoft said:

“As we discussed at Build 2016, you will soon be able to redirect certain websites to open with an app instead. This is a new capability so apps that support this are still in progress.”

Another new feature (which was seen in the Windows 10 PC preview last week) is the ability to swipe anywhere on a website in the Edge browser and move forward between previously visited pages. Hardly a new function as it was once a staple on later Internet Explorer builds, but it is making its debut on Windows 10 and the Edge browser.

As always, the build fixes plenty of issues in the Windows 10 Mobile insider platform, including an issue where DRM content in streaming services was failing. Another notable fix solves a problem where phones would reboot randomly when receiving notification from an app that has “Keep notifications private on the lock screen”.

The company also detailed some issues that it knows about, while typically asking users to use the Feedback Hub to highlight any problems. As this is a Fast Ring release, the features will be rough around the edges and will not work entirely as they will when launched to end users.

For a full list of the fixes and issues, head to Microsoft official Windows Blog.