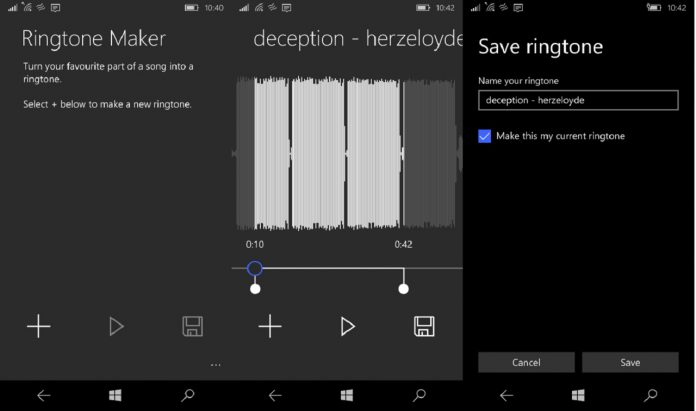 The company’s mobile platform is getting its own ringtone creation tool in the form of Ringtone Maker, which has left beta and is now available on the Windows Store.

Microsoft’s Ringtone Maker app has been anticipated for some time and has been available in beta form for a few months. The company has now taken the wrappers off the app and launched it officially in full release form on the Windows Store.

The Windows 10 Mobile compatible application does what it says on the tin. The Ringtone Maker gives users the freedom and customization tools to create their own ringtones from music and sounds already on the device.

For those of us of a certain vintage who used to get excited by texting a number to pay for a ringtone, the ability to craft your own on the device is still kind of novel. Of course, this is a pretty common thing these days and there are no shortage of third party developers already offering this features.

Still, it is nice to see Microsoft come out with something official and designed specifically for the Windows 10 Mobile platform and its devices. It is also easy to use, allowing users to select a song and then edit a specific segment to become the ringtone, while further customization allows the tone to be named.

“With Ringtone Maker, you can create ringtones and notification alerts from the music on your phone. Simply open the app, select your favorite song and save it as a ringtone. You can cut your ringtone any way you like, with editing controls that let you choose the start, end and length of your ringtone.”

And that’s pretty much it, no advanced fancy features to speak of, but it is a bespoke service that is not a specific music editor. Either way, it’s free and probably worth checking out from the Windows Store.