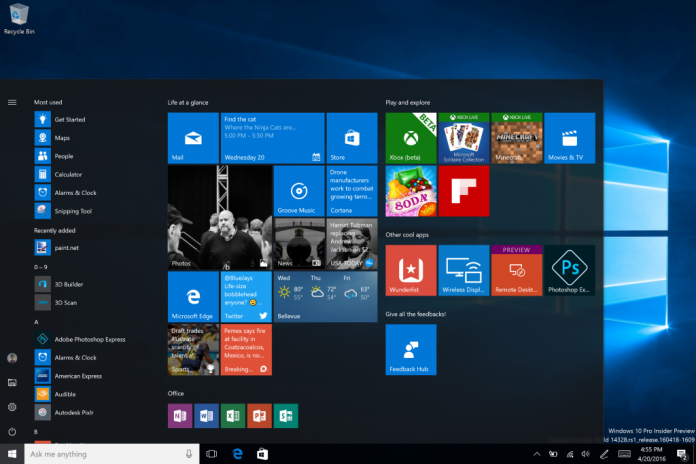 The Windows 10 preview builds continue to roll out at a rapid pace as Microsoft has launched build 14332 to Insiders on the Fast Ring.

Just a week ago the company sent out build 14328 to Insiders, a massive upgrade that gave us a look at plenty of features coming in the Windows 10 Anniversary update this summer.

Build 14332 is not quite as extensive as last week’s upgrade, but those on the Windows Insider Program are still getting some new features.

The update is also rolling out for Windows 10 Mobile, giving further hints towards the Universal Windows Platform Microsoft is creating.

As always with these preview builds, some of the features may not be complete or in their full form, but users are able to give feedback. The update is available to those who have signed up for the Windows Insiders Program on the Fast Ring, meaning there may be some issues in functionality.

However, this is another great chance to see some features that will eventually be rolled out to end users in June’s Windows 10 Anniversary Update. The new features included in build 14332 are:

Cortana: In Windows 10 preview build 14332, Microsoft has added a search dynamic that lets Cortana look for content in Office 365. This includes the virtual assistant being able to search in contacts, emails, calendar, and OneDrive for Business.

“To get started, just add your Office 365 work or school account in the Connected Accounts section of Cortana’s Notebook,” Gabe Aul, corporate vice president of Microsoft’s Engineering Systems Team, wrote in a blog post. “When you search, choose the appropriate filter (email, contacts, calendar, or documents) at the top to see relevant Office 365 search results.”

Battery Life: Improved battery performance for Surface products and any Connected Standby PC. “As a result, if you’re using a Surface or other Connected Standby PC, many of you will notice improved and more consistent standby battery life,” Microsoft notes.

Bash Fixes: A preview build for Windows 10 earlier this month brought with it much awaited Bash on Ubuntu support for the platform. However, there were some issues that prevented some tools running in Bash and stopping the platform accessing the internet. Microsoft says Windows 10 preview build 14332 fixes those issues.