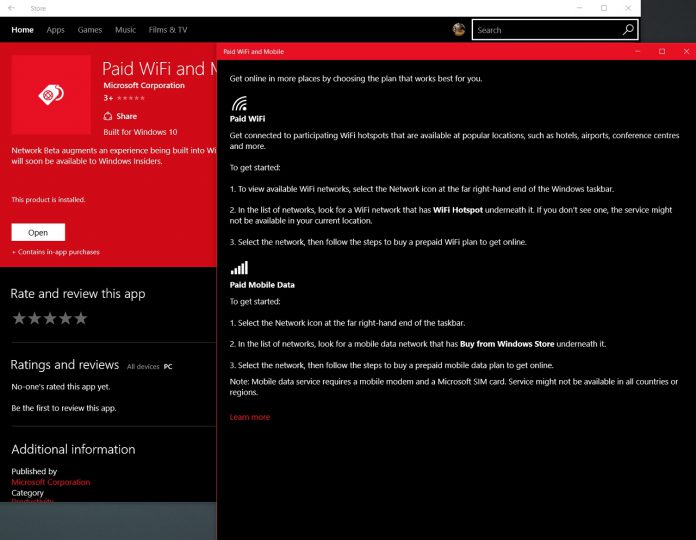 Insiders have found the long rumored Mobile and Data app in the latest Windows 10 preview builds, a feature that will give users a Wi-Fi and mobile connection on the move when using a PC.

Microsoft has been often rumored to be creating a paywall system that would allow Windows 10 devices to access data and Wi-Fi on the move.

The so-called Mobile and Data application is the latest proof of the concept and is likely to be the solution Microsoft decides to use.

It was previously speculated that the company would use a sim car like the Surface 3 LET or use the Skype Wi-Fi setup to access the paid data system.

The Mobile and Data app has now been discovered buried in Windows 10 preview builds 14328/14322, both of which have landed over the last week.

Users testing out the build on the Windows Insider Program has spotted a new application called Paid Wi-Fi and Mobile, which can be found within the Windows desktop apps. Other setting pointing to the feature include a Network toggle located in the Action Center and Paid Wi-Fi selections in the Wi-Fi settings window.

While Microsoft has still not confirmed a mobile data service exists, it seems apparent that the company is now definitely working on the feature. So much so that preview builds suggest that it could even be rolled out with the Windows 10 Anniversary Update in the summer.

At the moment the service is not functional in the preview builds, so it seems Microsoft is just putting the UI frameworks in place before adding the functionality.