Microsoft’s OneNote has come on leaps and bounds recently, but Evernote showed it is still number one in the note making app market with a huge update for its Windows 10 app.

Evernote has updated its Windows app to add a slew of new features and a design overhaul that the company says is substantial enough to make the app “all new”.

The company has been one of the main app supporters of the Windows Store and has released a Windows 10 Universal app.

The update to the desktop app brings some new features to the party, improves the search tool, and makes the UI a much nicer place to be.

Microsoft recently updated its OneNote app with a feature that allows Evernote users the chance to try out OneNote without losing any of their content. It was Microsoft firing a shot at market leader Evernote, but it’s unclear if this “all new” app is Evernote firing a Salvo back at Redmond or whether this update was planned before. Probably the latter. 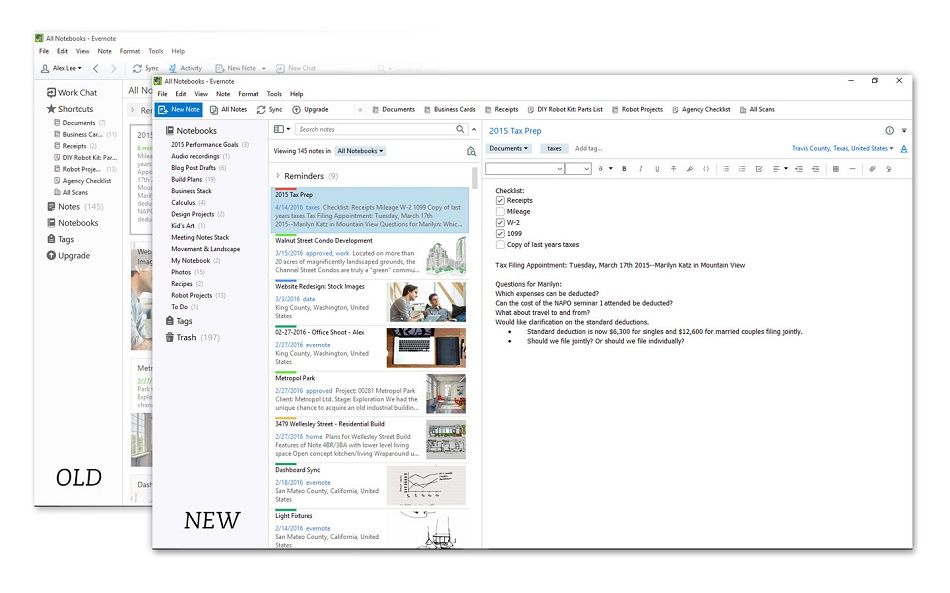 The company announced the main changes to the Windows 10 app in a blog post:

“Select ‘Notebooks’ to pull up all your notes in the Note List. Expand the ‘Notebooks’ section to reveal all the notebook stacks and notebooks not organized into a stack.

“Drag and drop a notebook into or out of a stack to move it to a different location.

Search has also been given a functionality upgrade and is now easier to use when navigating through the application on Windows 10.

“You’ll notice that the search bar sits at a new, more natural place on top of the Note List, closer to your results. Now when you perform a search, Evernote will suggest narrowing down to specific notebooks and introduce parameters to refine or broaden the breadth of your search. Evernote will also scavenge through ‘Trash’ for relevant notes that might have been accidentally deleted.”

As mentioned, the Evernote app has also been given an aesthetic overhaul to make the UI prettier and of course, more functional. The sidebar has been updated so users can choose to make it smaller, while a new tab system lets user switch between Personal and Business accounts easily.