As expected, Microsoft delivered a very encouraging earnings call on Thursday, while the company’s strategy as a cloud first provider is clearly paying off.

Earlier today we wrote a feature on how Microsoft has fought back from a decade long slump and is on course with potentially a record breaking first quarter.

Well, the results are now in after Microsoft announced its earnings for Q1 running through the first three months of 2016 (Redmond’s fiscal third quarter).

Indeed it proved to be a bumper period for the company and one that was driven by the company’s cloud first strategy.

Through its third quarter, Microsoft pulled in $22.1 billion in total revenue and earnings of $0.62 per share, figures which bested the same period last year and analyst predictions. 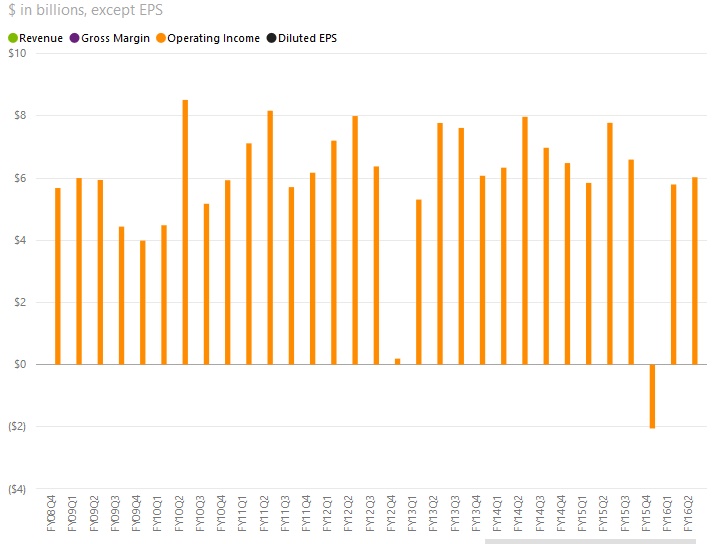 The stock had risen 0.34 percent during trading, but the slip after hours was expected because of the huge expectation placed on Microsoft this frame. In terms of income, Microsoft continues to be hugely profitable with a non-GAAP income of $6.8 billion (above) through the first three months of this year.

The successful quarter allowed Microsoft to return $6.4 billion to shareholders in dividends and share repurchases.

Microsoft has been consistently telling the world that it is a cloud first company these days, and the financials continue to back up that assertion. To the point that the company’s Intelligent Cloud business is propping up other less successful divisions and is even vastly outpacing Microsoft core businesses like Windows and Office.

The company’s cloud services like Azure and Windows Server drew $6.1 billion in revenue, which represents a 3% gain from the same quarter a year ago. Azure is really starting to become Microsoft’s chief business and saw substantial growth of 120% as Microsoft continues to steal a march on rivals Amazon and Google. 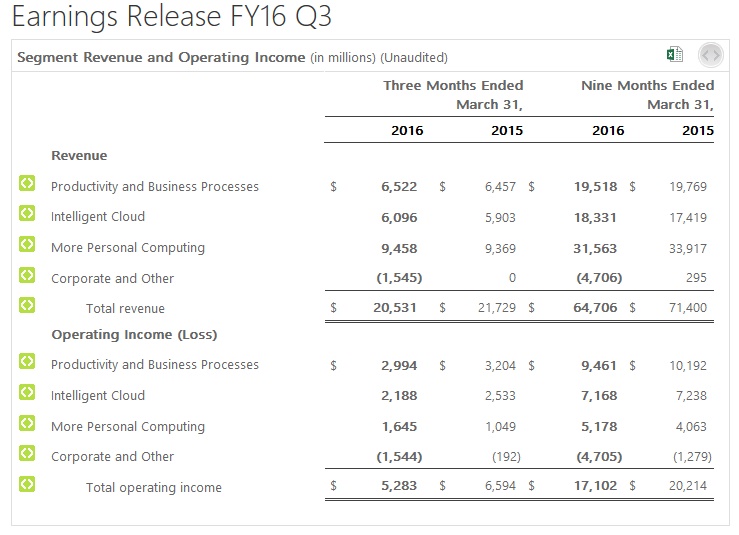 “Organizations using digital technology to transform and drive new growth increasingly choose Microsoft as a partner,” Microsoft CEO Satya Nadella said in a statement. “As these organizations turn to us, we’re seeing momentum across Microsoft’s cloud services and with Windows 10.”

Microsoft added that its cloud business now exceeds $10 billion for its annual runrate.

Productivity products and services grew slowly over the fiscal third quarter improving 1% year-on-year to $6.5 billion. Office cloud and enterprise based services such as Office 365 performed well, increasing 7% over the quarter, while consumer Office revenue increased 6% and Microsoft confirmed 22.2 million new Office 365 subscribers in the consumer space.

The Surface line appears to be gathering pace and selling in significant numbers, although Microsoft is still not saying exactly how many it has sold. Mobile declines continue to be worrying, and it is hardly a surprise that Microsoft has not broken down the finer details of this business in the earnings call.

Xbox Live subscriptions are still doing well and were up year-on-year by 26% to 46 million. There is a caveat here though as the service has actually lost 2 million users since the last quarter, when there was 48 million subscribers, a record.