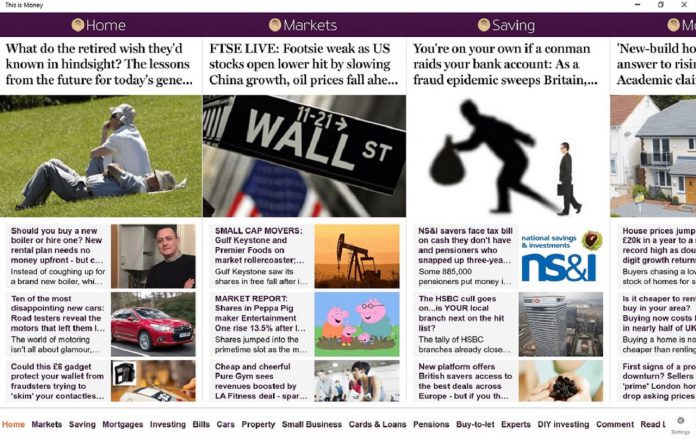 The Daily Mail is having a busy week. The British based print and online newspaper said it is interested in purchasing Yahoo and has now launched a new Universal Windows App to the Windows Store.

Of course, the Universal Windows Platform (UWP) tag means the “This is Money” app is useable across platform on Windows 10 PC and mobile devices.

As the name rather suggests, This is Money is focused on finance, and more specifically the Daily Mail’s own financial segment of its newspaper.

This is appealing to the business crowd, but anybody can pick up the app and see the latest news on global economics, feature advice articles, and tips offered by specialist writers.

Daily Mail and General Trust said earlier in the week that it may be interested in being a partner in a purchase of Yahoo, according to Reuters. Microsoft has also reportedly been in talks to purchase the struggling dotcom giant that said it is up for sale earlier in the year.

“Microsoft’s interest seems to be as an investor as opposed to the company wanting to buyout Yahoo in its entirety. However, the company is apparently willing to stump up a substantial amount of cash to equity firms proposing bids for Yahoo, suggesting Microsoft’s interest is that of a major partner in any new ownership consortium.”

The Daily Mail’s interest stems from wishing to broaden its online reach in terms of delivering news, which Yahoo’s email, search, news, and sport services would help the company accomplish.