Visual Studio Code 1.0 has been announced by Microsoft, while the company says the service has gained traction with developers.

Microsoft has announced that Visual Studio Code is doing extremely well and already has half a million active users since launching in August 2015.

Visual Studio Code is a free to user open source editor and debugger that developers can use to make JavaScript and TypeScript web-editing easier, while also becoming a multi-language debugging service.

The software has now reached version 1.0 Microsoft confirmed and said that since its launch last year Visual Studio Code has been installed more than two million time.

Version 1.0 brings new features that Microsoft has been working on for months, but the company says the update is about more than features and equally about what the company envisions for the service. 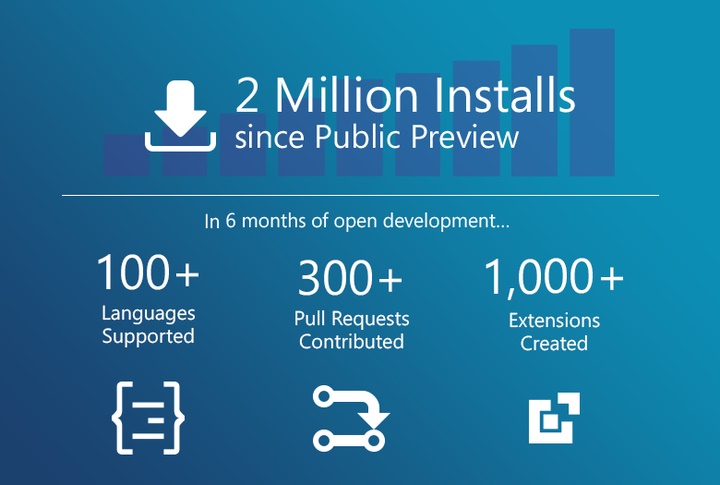 Microsoft says it has been working on feedback from users and working towards stabilizing Visual Studio Code, “fixing hundreds of bugs” and improving the editing experience.

Extensions were added to the services earlier in the year, and the developer community has responded by already creating 1000 extensions that the company says cover most languages and runtimes in VS Code. The company adds that the improvements made to Code since it was launched means it can now be deemed as a stable API.

In an official blog post, the Visual Studio team said the service is now shipping in multiple languages:

“We have strived to make VS Code 1.0 a great editor for every developer. VS Code is now fully localizable, and ships in 9 different languages, including French, German, Japanese, and Chinese. And, we have worked to make VS Code the most accessible of modern editors, with full keyboard navigation and support for screen reading and accessible navigation for visually impaired developers.”

In many ways, Visual Studio Code is a perfect example of the modern Microsoft, willing to play nice with others and expand its services to other platforms and make them open source.