Redmond has reportedly cooked up a simple solution to troubleshooting the dreaded blue screen of death (BSOD) crashes that effect Windows machines.

Of course, these kinds of crashes do not necessarily mean the death of the machine, but they are always worrying, and sometimes to spell catastrophe for a PC.

No computing platform is safe from these kinds of crashes, but the visibility of Windows means the blue screen of death has become more infamous than similar failures on other platforms.

The problems with BSOD’s is that they usually offer some pretty poor information regarding what actually caused the crash, typically leaving users needing to search online for a solution. 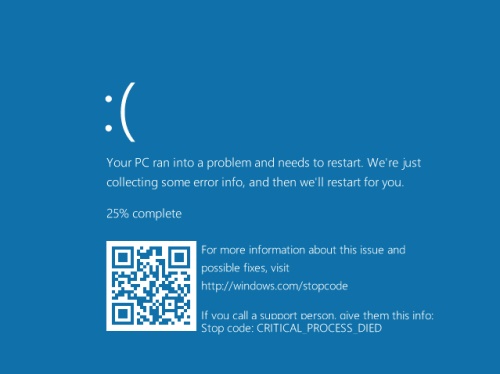 Sure, Microsoft sends out error codes with each crash, but normally there is not enough time to take note of these codes. The company is now working on improving the BSOD system, according to a source at BetaArchive who posted a screenshot of Windows 10 Insider build 14316 showing a QR code placed within a BSOD.

Some of you will probably remember that Microsoft has recently removed the QR Code Scanner app from Windows 10 Mobile, so this upcoming feature would be ironic. Of course, there are other QR code scanning options and using a code in BSOD seems like an easy way to search for information about a crash.

Gimmicky? Maybe, but a nice touch nonetheless. It is worth remembering that this is not a confirmed feature as yet, but if it is currently available to Insiders, then we can expect to see it come to end user builds soon.