The first public release of Dev Center has arrived, allowing developers to manage and care of their applications, while Microsoft is planning more features this summer.

Microsoft has issued its first public release of the Dev Center application for Windows 10 and the company is requesting feedback from users in the aim of improving the experience.

Dev Center is for Windows developers and gives them a resource for updating and monitoring their applications in the Windows Store.

Think of it like Microsoft’s own app management tool for developers and you’d be pretty close, with the ability to see the health and performance of an application, see how many times it has been downloaded, read feedback, and investigate crashes.

The Dev Center app is part of Microsoft Universal Windows Platform, which means it will work on both desktop machines and mobile devices like tablets and smartphones. 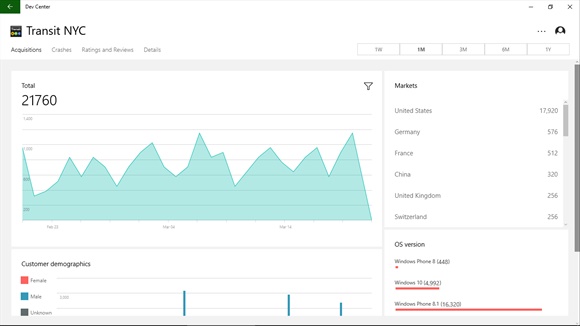 As the first public release, the app is still gaining features and is certainly not complete. Microsoft is asking developers to give feedback, while the company is also promising a summer update that will add such features as IAP reporting, Payouts Reporting, and “many more features.”

“The Microsoft Dev Center app allows you to quickly view details about the health and performance of your Windows Store apps on any Windows 10 device. Note: You must have an active Windows developer account in order to view this data,”

Windows 11: How to Update Apps and Games in the Microsoft Store