While Microsoft has enjoyed market dominance in the web browser space for many years, there is a good chance that it could soon lose that number one position to Google’s Chrome.

The Edge browser (complete with extensions these days) for Windows 10 is viewed by the company as a fresh new start, a chance to show that Microsoft can still build the best web experience.

Many would argue that Internet Explorer has been poor for several years, but it is still the predominant browser used on Windows machines until Windows 10 gathers more market space.

Net Applications has released new data that shows that Microsoft’s combined browsers (Edge and IE) are still the market leaders with a 43.4% share through the month of March. 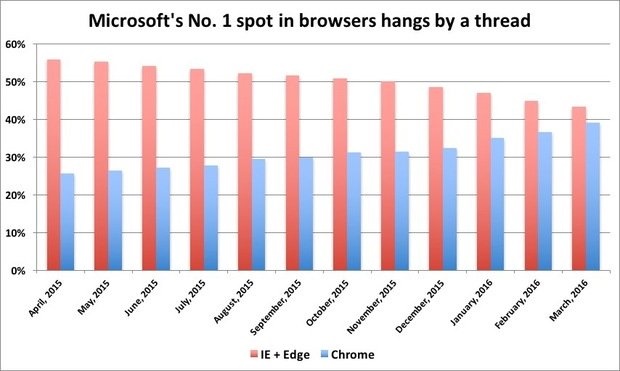 However, that is down significantly from 56.5% through the same month last year, and that year-on-year decline is playing into Google’s hands. The company’s Chrome browser grew 2.5% through the last month, covering a total market share of 39.1%. Microsoft position slipped 1.4% from February to March, 2016.

In a way Microsoft is the architect of its own market decline. At the start of the year the company stopped supporting Internet Explorer 8, 9, and 10. Users without Windows 10 had a clear choice between upgrading to Internet Explorer 11 or a rival browser such as Mozilla’s Firefox or Chrome. It appears that at least some decided on the latter.

At the current rate, Chrome could become the number one browser in the market, but Microsoft is working to stop that from happening. The Edge browser is catching up to its main rivals in terms of functionality, with extensions for Windows apps (and other upgrades) coming in the Anniversary Update for Windows 10.