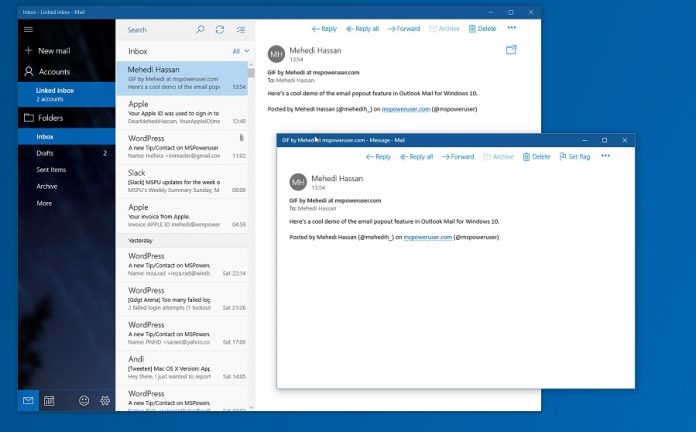 The new feature will allow users to see more than one email at a time in Microsoft’s Mail app for Windows 10.

While Microsoft has been improving its Mail app in Windows 10 with updates, there are still some features that most users want to see.

The company is not sorting all those missing goodies in one go, but Redmond has issued a new update for the Mail app that adds one feature that many users have been asking for.

An update for the application brings the ability to see a pop up message in a separate window, and the update is expected to be arriving very soon. Unreleased versions of the updated Mail app are already rolling out right now, so end users should be looking for the update in the coming days and weeks.

Those who have been using Mail for some time will already know plenty about this feature, as it was once a part of the service. For some reason Microsoft decided to remove the feature, likely to make some tweaks, although a similar pop-up feature is found in the Calendar application.

The biggest benefit that a pop-up separate windows achieves is that is allows users to look as more than one email at the same time. At the moment this a frustrating experience that means switching between mails, not exactly a user-friendly solution.

With Microsoft’s Build Conference kicking off this week, it is expected that Microsoft will push out the Mail update, possibly within the latest preview version of Windows 10 Redstone.