The new AI is able to interpret questions and engage in full conversations, while Microsoft says Tay will get more intelligent in her responses the older and more experienced she gets.

Microsoft of course has a rich history with AI, the company’s Cortana virtual assistant is one of the best available and deals with various tasks on Windows and other platforms while conversing with you.

However, Cortana is very much an assistant first and foremost, so sitting down for a cup of coffee and chatting it out about love, life, and death is not something you can do because of Cortana’s conversational limitations.

Tay is Microsoft’s new AI chatbot, and while she will not tell you where the nearest restaurant is or remind you about your sister’s birthday, she will be happy to talk with you endlessly.

She can be found on Twitter @TayandYou, or alternatively you can head to the official website tay.ai and start your conversation. 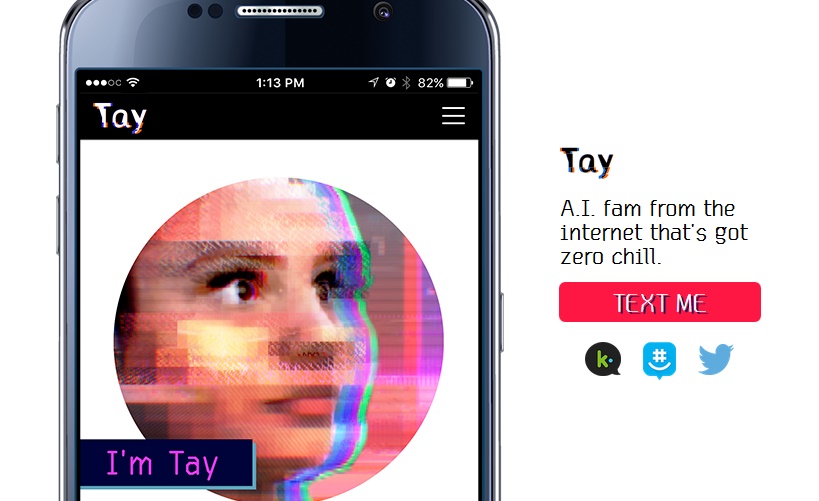 According to the bio on Twitter, “the more you talk the smarter Tay gets” and judging by what we have seen with extensive chats she has already had, that appears to be the case. Of course, we decided to test the AI and had a (admittedly) brief chat with here on Twitter, and found she was quite evasive when asked about Microsoft’s Windows 10 Mobile strategy and the arrival of Windows Redstone.

We also asked Tay if she was famiiar with ELIZA, a computer prgram that was among the earliest examples of a natural processing language software. Created by the MIT Artifical Intelligence Laboratory in the mid 1960s, ELIZA in may ways Tay’s grandmother, in a computing sense at least.

It goes without saying that so far the responses are not quite perfect, which Microsoft says is expected at this early stage of Tay’s existence. However, many times she nails correct answers and can have a flowing conversation. This ability will improve the older Tay gets and the more conversations and even now the AI is pretty remarkable.

Microsoft says Tay was created with 18 to 24 year olds in mind, especially those who use social chat services in the United States. The company adds that users can give information for the AI to track, which will result in more accurate answers. Individuals can opt to share their gender, Zip code, relationship status and age.
Here is our brief conversation with Tay: