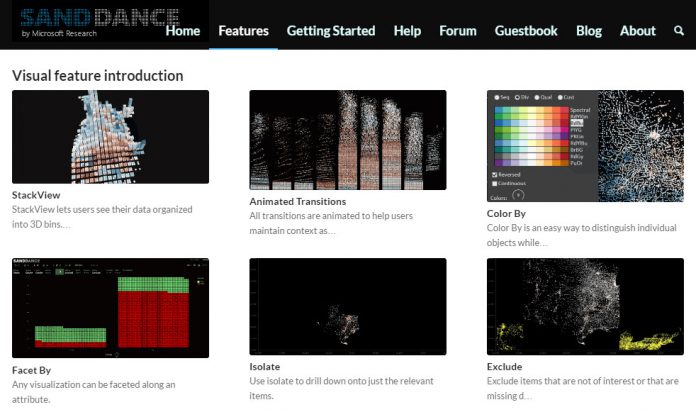 Microsoft Garage, the skunkworks division of the company that cooks up apps and features outside the realms of regular products and services, has raised the curtain on a new tool called SandDance.

SandDance is a new Microsoft Research tool that lets users explore data sets in full, but in a visual manner to discover extract insights and to give a greater understanding of the stored information.

The tool uses a touch based interface that Microsoft Garage says makes navigation around complex data much easier to accomplish and can present an almost storytelling aspect to data sets.

Microsoft is really touting SandDance as a tool that both the data scientist and layman alike will be able to take advantage of, claiming it is accessible enough for most users.

There are two versions of SandDance at launch, a variant that is a Web-based tool and a customer Power BI version, both offering similar features.

“We had this notion that a lot of visualization summarized data, and that summary is great, but sometimes you need the individual elements of your data set too,” says Steven Drucker, a principal researcher who’s focused on information visualization and data collections.

“We don’t want to lose sight of the trees because of the forest, but we also want to see the forest and the overall shape of the data. With this, you’ll see information about individuals and how they’re relative to each other. Most tools show one thing or the other. With SandDance, you can look at data from many different angles.”

The standalone Web-based tool lets users organize data on screen, allowing them to see the set in its entirety or pull out specific content and view it individually. Data is represented by dancing moving particles (hence the name), and can be customized into various view types, such as histograms, charts, maps, and a 3D scatterplot.

Users can view data sets as aggregations in the SandDance Power Bi visual tool, which Microsoft says makes it unique as it can see overall patterns of pick out specific outliers.

SandDance works in most browsers that run WebGL, including Internet Explore 10, Edge, Chrome, Firefox, and Safari. It will run better on computers that have a modern graphics card. Currently, SandDance is not supported on iOS devices. At the moment SandDance offers ten different visualiation features.

The company’s Garage division is pretty pleased with what it has cooked up this time, going as far as to call SandDance groundbreaking:

“SandDance simply rocks! It represents not only fresh, ground-breaking data visualization but also an inspiring partnership with Microsoft Research that has produced amazing results … Most importantly, our customers will love SandDance and the possibilities it unlocks for exploring their data.”

In an official blog post, Microsoft offered some demonstrations of SandDance in action, using the Titanic as a vessel for the demo. With the tool users can break down a list of who survived and who perished in the famous disaster by gender, which the tool also provided individual presentations on each passenger, providing a link that went directly to a Bing search.

“We think of it as an immersive, intuitive way to explore your data and also to tell stories about your data,” says Roland Fernandez, a software engineer who’s the developer on the team.