Following the release of the new Office 365 Admin Center, several new features have been added to provide admins with more efficient tools to manage and track user activity.

Microsoft’s new Office 365 Admin Center gets a sizeable update just weeks after its introduction earlier in the month. At the heart of the update is the new reporting portal, which will provide information on how various services are being used.

The portal allows admins to quickly get updates — weekly and even daily — on how Office 365 users within the business are activating and using the service. More than that, the reporting portal will also provide in greater details the usage information of individual user all the way to each specific workload.

Tying in to the reporting portal and a big part of the update as well is the new activity dashboard. This is where all the information will be presented in easy formats. An illustration given by Microsoft, as posted on its blog, is how a certain individual is using Office 365 suite to communicate through e-mail. 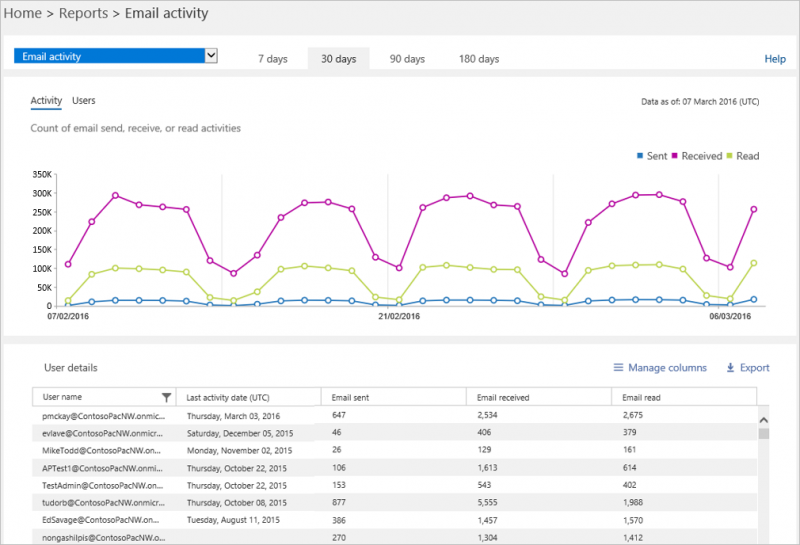 As shown on the screenshot above, admins will be able to track the number of emails sent, received, and read within a set of periods for each user. The data can then be exported to CSV format for more analysis if needs be.

For now, folks in the U.S., Canada, and Australia can already utilize the new reporting portal to get more insights on three types of reports: active Office 365 users, email activity, and Office activations — with more reports coming soon in April, including usage stats on SharePoint and OneDrive.

The new portal will be made available for businesses in Europe, APAC, and Latin America next month.