UMi Touch is a 5.5-inch metallic phone with 3GB of RAM and fingerprint sensor, with Windows 10 Mobile compatibility promised in the future.

Chinese OEM UMi has released its latest hero smartphone, the Touch. It’s a MediaTek powered Android device that can be pre-ordered for $149. The phone comes pre-installed with Android 6.0 Marshmallow, but it’s possible to turn it into a full-fledged Windows 10 Mobile device with a little bit of work.

The UMi Touch is equipped with a 5.5-inch Full HD screen covered with Gorilla Glass 3. It’s powered by a 64-bit MTK6753 Octa-core processor running at 1.5GHz and Mali T720 GPU. The phone will come with 3GB of RAM, 16GB storage, 13MP rear camera with Sony sensor, 5MP front cam, 4,000mAh battery, and as mentioned, a fingerprint sensor that doubles as a home button.

To install Windows 10 Mobile on the phone, customers will have to download and use a tool called Rootjoy from the company’s website. Not only will it allow users to load a new operating system, but it will also act as a data back-up solution. 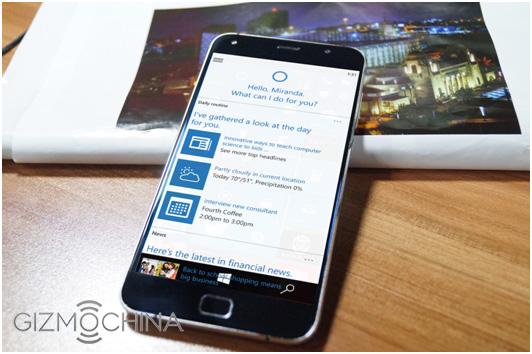 While there’s no word yet on when the free Windows 10 Mobile ROM will be made public, GizmoChina had a quick hands-on of the device running it. Trying out multiple apps like Office, Messaging, Skype, and Lumia Camera, they seemed to come away impressed with the overall performance. Unfortunately, there’s no mentioning of the Continuum mode and whether it’ll support it or not.

UMi’s website has listed several online vendors that customers can purchase the phone from. But as is the case with some less known OEMs, it’s worth noting that warranty and build quality can be quite tricky. Then there’s a matter of whether or not the intended carrier supports the phone’s bands.

If you want to play it safe, you can always stick with the big names and get the upcoming Lumia 650 instead.