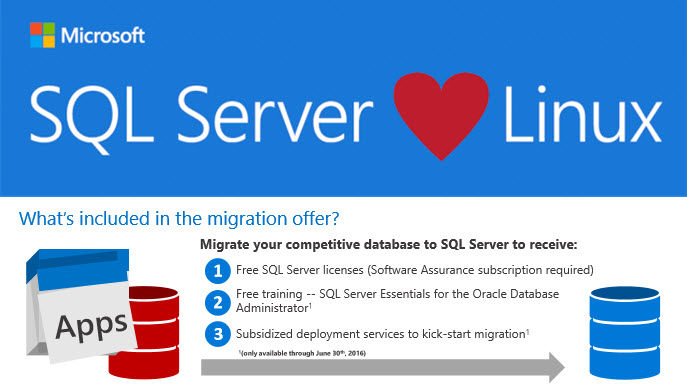 Redmond was pulling out all the stops at the recently wrapped Data Driven SQL Server Event to try and convince potential customers to make the switch to Redmond’s own database solution with free services and training.

In fact, the company didn’t try to be subtle at all as it made direct comparisons of its own services to its fiercest competitor in the enterprise database market on PowerPoint presentation and marketing materials:

“SQL Server leads the industry on security, performance, and price. And we want to prove to you that there is no equal. Move your Oracle databases to SQL Server and receive the necessary licenses of SQL Server – free with software assurance.”

However, as the fine prints suggest, Microsoft isn’t about to throw a free lunch party just to spite the other guy.

Aside from requiring users to get the Software Assurance subscription for three years, they will also have to “enroll in a new/renew Server Cloud Enrollment (SCE)” with a minimum requirement of 50 cores and the entire SQL Server installation has to carry Software Assurance coverage. Yes, there are a lot of caveats.

The lucrative migration offer also comes with free training for Oracle database administrators and subsidized deployment services, but these added benefits will only be available until June 30, 2016.

Following the announcement that SQL Server will be coming to Linux platform next year and now with the aggressive push to grab Oracle database customers, the company is looking to change its fortune in the market place. As per IDC, Microsoft’s 21.55% share trails Oracle’s 40% in the worldwide database vendor market.

Microsoft hasn’t set a release date yet for the much awaited SQL Server 2016, but it’s expected to come later in the year bringing along with it new features like real-time operational analytics, rich visualizations on mobile devices, hybrid cloud scenarios, and more.