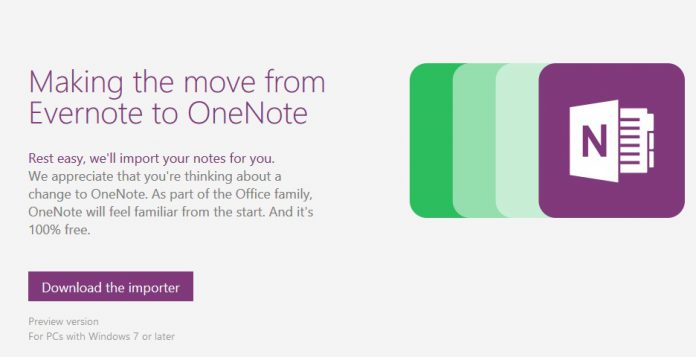 A new feature on the Windows OneNote application lets users import content from Evernote to Microsoft’s service, letting them try it out before committing.

Microsoft is giving Evernote users the chance to use its rival application without having to lose any content they have created, allowing them to import content from Evernote to OneNote.

The new option has been unveiled as an importer tool for Windows, giving Evernote users a chance to use Microsoft’s note taking service without committing to losing their work and/or notes.

Of course, Microsoft’s ultimate goal is to see Evernote users migrate to the service permanently, and while the importer is currently a Windows only service, it will be coming to Mac in “the coming months” the company said.

The OneNote Importer tool will be available from March 11 (today), and you can download it at the Microsoft official site, here. Microsoft confirmed the tool in a blog post that stated:

OneNote and Evernote are similar in many ways, but we think you’ll appreciate the advantages OneNote has to offer, including a free-form canvas where you can mix text, images, documents, handwriting, audio, video and more; free offline access; and unlimited monthly uploads.

Using the Importer tool is easy, but users will have to be running Windows 7 or later, and Evernote does not even need to be installed on a device to migrate the content. Imported content will be automatically synced across all devices running the app, including Mac, Android, and iOS.