The company has begun testing its voice calling feature just a day after it was confirmed that voice and video calling would be coming to Slack in 2016.

Just yesterday the chat service said it will be introducing video and voice chat support, and now Slack has begun testing the latter in beta form on some of its desktop applications.

The voice chat test is being carried out via Slack’s desktop applications and through the Google Chrome web browser on PC.

With rival services like Skype and Google Hangouts already offering a robust feature set, Slack is playing catchup, and the company is saying the addition of voice chat will make the service more functional.

It was just yesterday that the company confirmed that it would be launching voice and video chat support, saying “[Voice] on desktop will come first, and then the company will focus on making it work on all its devices and apps”.

If you have the Slack desktop app or are using the service through Chrome, you can take advantage of the voice call feature by selecting the phone icon at the top of a channel or a direct message thread.

Slack’s Vice President of Product April Underwood spoke to TechCrunch and confirmed that the company is aiming to add functionality to compete with rivals:

For customers who already use services like Skype, Google Hangouts, Zoom, and Bluejeans, it’s easy to initiate a variety of calling features from within Slack, but for customers who need a simple solution for voice calls with members of their Slack team, this new feature will make Slack more useful. We’re looking forward hearing feedback from customers testing the beta, and are eager to get this feature in the hands of customers in our Slack mobile apps soon.

Before you can use the new Slack calling-feature you need to turn it on in your Slack-Settings. You can find the option in the Team Settings, using the URL YOURTEAM.slack.com/?redir=%2Fadmin%2Fsettings#enable_calls brings you directly to the page. 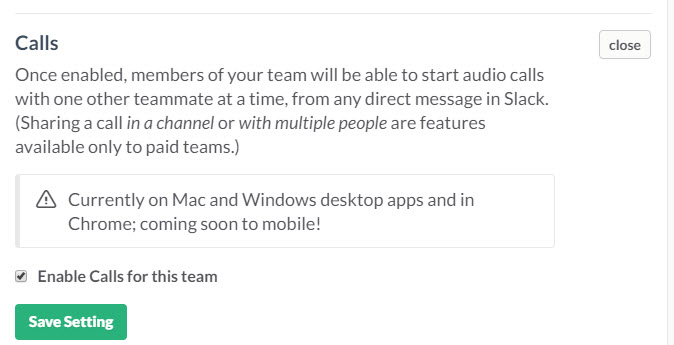 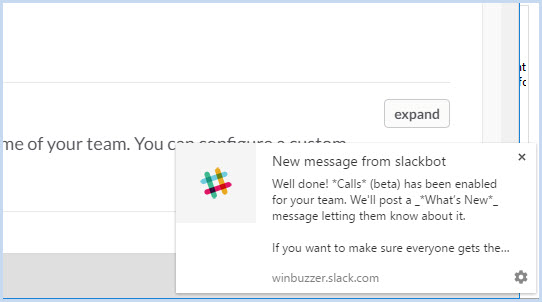