More and more Skype for Linux users are signing a public complaint shared by an angry Linux user using the #ThanksBill hashtag. According to the initiative, starting from February 22 the Linux client is unable to join calls.

Although the last Skype for Linux update is more than three years old, Linux users were still using that quite outdated Skype version. Not because it´s their preferred messaging software, but mostly as a result of peer-pressure as Skype is simply the most-used messaging app around.

While Microsoft has consistently released updates for Skype on all other platforms, including Windows, iOS, and Android, the company has not shown any activity about an update of Skype for Linux.

The core of the Linux client is basically from the time, before Microsoft acquired the messaging pioneer.

According to the campaign page, Microsoft has just turned the switch without even announcing the decision to the quite substantion Skype for Linux user base. 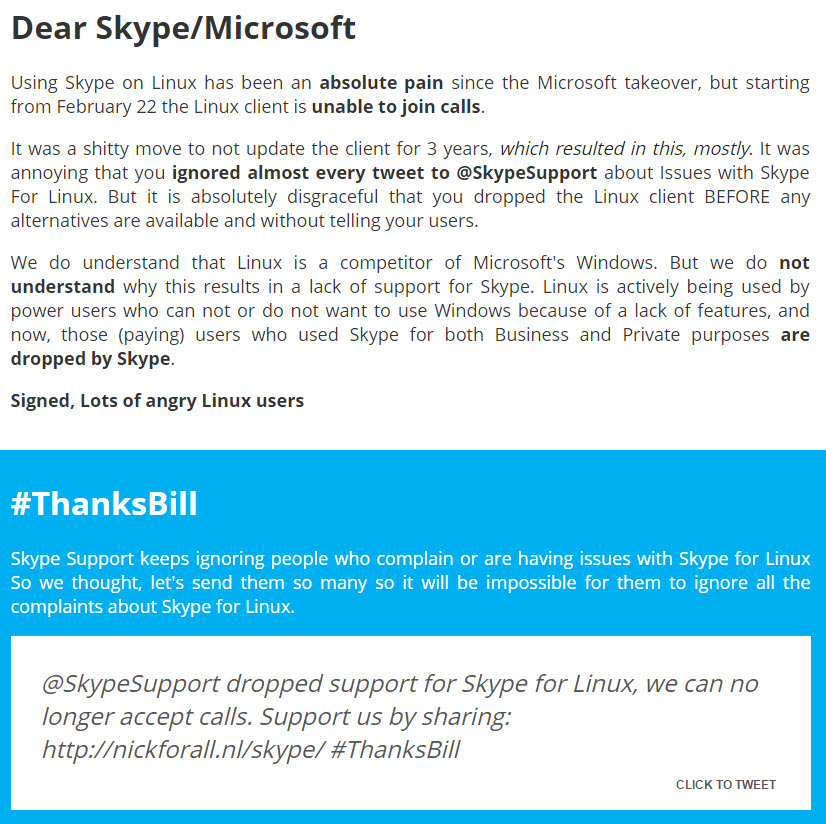 “It was a shitty move to not update the client for 3 years, which resulted in this, mostly. It was annoying that you ignored almost every tweet to @SkypeSupport about Issues with Skype For Linux. But it is absolutely disgraceful that you dropped the Linux client BEFORE any alternatives are available and without telling your users.”

Nick Vernij, one of the first users to bring up the issue, explained that Skype for Linux seemed to have stopped working shortly after Skype’s latest update for Windows has been released.

Talking to MSPoweruser,Vernij details how the February 22 update has resulted in cutting off Skype for Linux:

“We have had issues with Skype for linux for a while, calls didn’t work, the client crashed etc. When I updated my Windows desktop to the latest Skype version, I noticed I got the message (1) “Boltgolt needs to update Skype in order to join this call” . He is using Skype for Linux, which is a Skype version from around 2012 ported to Linux in 2014 by Skype.”

“So we did a couple of tests, and it turned out the newest update broke Skype calls for him. When calling from a client that hasn’t updated on the 23rd, everything worked fine. With the newest update, he isn’t able to join with the message that he should update Skype. So you are still able to call users, and host group calls from Linux, you just aren’t able to join any hosted by the newest version. And their “replacement”, Skype Web also doesn’t work on Linux.”

According to Vernij, they did try to reach out to Skype support to try to resolve the issue. He claims, however, that Skype agents did not get back to them after finding out that the app they were using was Skype for Linux.

“We tried to contact Skype Support, but as soon as we mentioned Linux, they did not get back to us. We have tried to contact them about the issues a couple of times before, where they also didn’t get back. So out of frustration we created this website, we figured that maybe they would respond to the issues with Skype for Linux when a lot of people mentioned it.”

Microsoft is Dealing with Outages Across Skype and OneDrive