Microsoft’s augmented reality device is taking shape ahead of its reported Q1 2016 launch to developers, with the latest HoloLens news pointing to a hardware accessory.

A veritable bounty of information regarding the HoloLens has arrived, including leaked info on the Start Menu and health and safety details.

One of the more interesting new details about Microsoft’s augmented reality headset is that it will get some accessories to make navigation and general use easier.

Among The rumored accessories is a Bluetooth clicker that will help HoloLens users interact with holograms and navigate menus easier.

Following previous leaks earlier today, another video has leaked online. It is an instructional how to that tutors users on how to create the best video sharing content while using the headset. 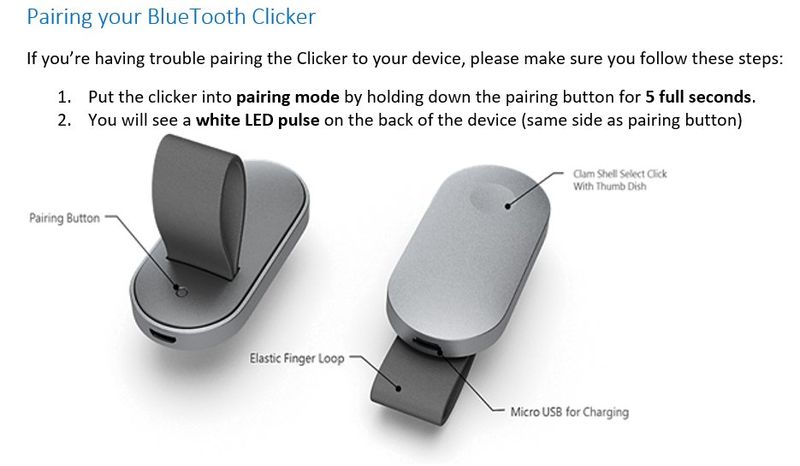 Starting with the Bluetooth clicker, it is a small device that adds to the way in which users can control and interact with HoloLens.

At the moment there are three points of interaction, Voice, Gesture, and Gaze. Voice allows for the users to control to HoloLens via voice commands, Gaze works by HoloLens following the direction in which the user looks, and Gesture allows users to select items with a gesture click without any hardware.

It is this latter method that Microsoft is looking to enhance with the Bluetooth clicker, with the company thinking HoloLens owners may not always want to raise their hands and air-tap. The clicker lets users simply click to select and sports a loop to stop it slipping from the finger.

Leaked How to Video

HoloLens is the gift that keeps giving at the moment, with a new leaked video showing us how we will be able to easily create video content with the headset.

It is not a long video by any means, but it does show that lighting will be extremely important when trying to craft and augmented reality clip. The clip also suggests users avoid using words that could double as voice commands, and that two people and a quiet place to shoot are also advisable.

Report: US Gamers Are Not Spending as Much as They Did in 2021