Huawei has done a good job by disrupting the mobile applecart over the last year, its smartphones providing a high end alternative to Android and iOS flagships.

The Chinese company is now turning its attention to Windows 10 with a tablet/laptop hybrid that seems to be a true competitor to the Surface Pro 4.

If you want your high end kicks with Windows 10, the Surface Pro 4 is a go to choice, but the Huawei MateBook is an equally premium and well spec’d alternative.

Launched at the Mobile World Conference in Barcelona, the MateBook really seems to be Huawei firing a salvo at Microsoft and targeting the Surface Pro 4.

That is not necessarily a bad thing for Microsoft, with the company wanting as many quality products on the Windows 10 platform as possible.

The MateBook is excellent on first impressions, a feat of classy ergonomics and svelte lines. If the Surface Pro 4 is classily chunky, Huawei’s convertible tablet is sexily svelte. Moving away from the superlatives, the MateBook is 6.9mm thick and weighs in at 640 grams, both of which are less than the Surface Pro 4. 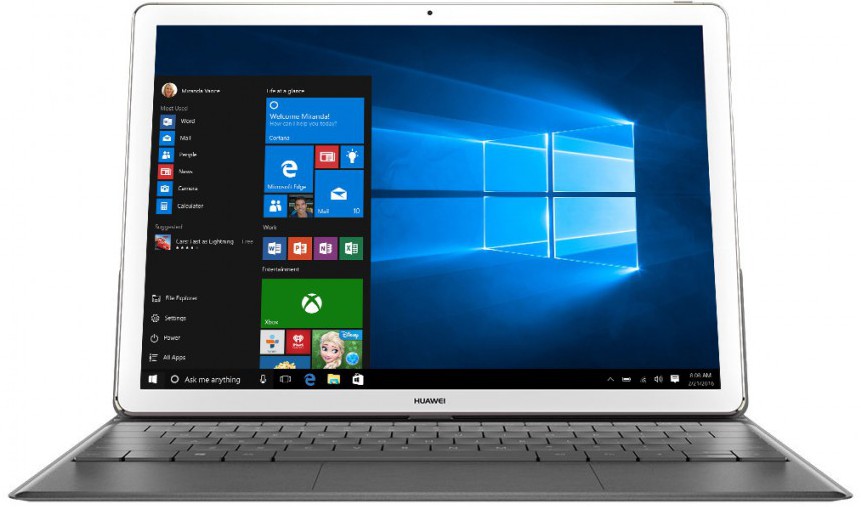 A metal design and an attention to detail that is starting to separate Huawei from its fellow Chinese companies make this a desirable aesthetic. The innards are not to be sniffed at either as this is every bit as decked out as Microsoft’s convertible flagship.

A clarity rich 12-inch IPS LCD display affords 2160×1440 pixels resolution and 400nits brightness for an enviable screen experience. A tiny 10mm bezel means the tablet part of the MateBook is a near all-screen look and also helps the device gets it svelte and light look.

The Surface Pro 4 comparisons are frequent, especially as the Huawei MateBook comes with a number of accessories that are similar to Microsoft’s efforts.

Chief among them is a waterproof keyboard that can also be transferred into a portfolio case, although it is admittedly pricey at $129/€149. If you are unconvinced by small keyboards on a tablet, then this is unlikely to sway you, although Huawei has crafted an excellent deck nonetheless.

The $59/€69 MatePen is hardly a revolutionary stylus, but it does allow for 2048 levels of pressure sensitivity and an elastomer tip, while Huawei has boosted functionality by allowing stylus to double as a PowerPoint clicker. Rounding out the accessory list is the $89/€99 MateDock, which comes with HDMI, VGA, Ethernet, and two USB ports, one of which is of the USB Type-C variety.

This is a pretty potent package that can be configured at different levels starting at 128GB model with 4GB of RAM and a Core m3 processor. That entry level device is much more affordable than the Surface Pro 4 at $699/€799, and the Huawei MateBook will be launching in Asia, Europe, and North America “in the coming months.”