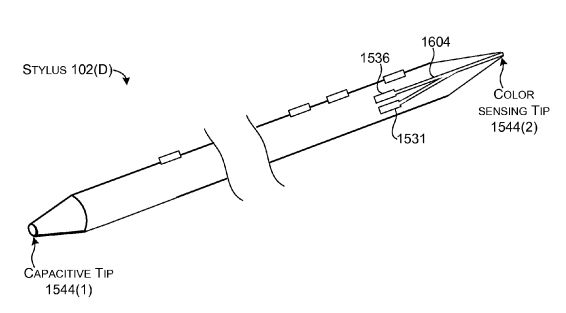 A new patent could see future Surface stylus come with the ability to read colors and textures, however, there is no guarantee the tech will ever launch.

Once written off by Apple’s Steve Jobs, the stylus is still a tool for productivity used by leading companies (ironically including Apple), such Microsoft’s Surface tablets.

Redmond’s latest patent would expand the functionality of future styluses and bring more software features to products such as the Surface Pro.

The filing lists a stylus that can determine the color of a physical object by merely holding the tip to it, while also utilizing a similar method for textures.

It is worth remembering that not every patent gets put into production, so Microsoft could just be covering its technical bases.

Whether the company ever puts this tech into production remains to be seen, but it is an interesting new twist on the stylus. The ability to simply press the tip against a texture or color and have it digitally remapped on a screen could bring a host of new features to Microsoft’s hardware.

Of course, when a user needs to map a color or texture accurately, simply using the stylus would make the process simple and quick. In terms of textures, this patent could be a help to 3D modelers who want to get the surface material of a model right, with a similar application potentially viable for 3D printing, giving models accurate textures.

It is always worth remembering that patents don’t always get turned into real tech, and sometimes filings sit on the shelf for years before either getting made or scrapped as technology moves on. Microsoft could simply be patenting an idea so that rivals cannot copy it, or equally this could be the real deal and the company will produce it.

We prefer the latter and hope that Redmond pushes these ideas and becomes even more of a hardware innovator.