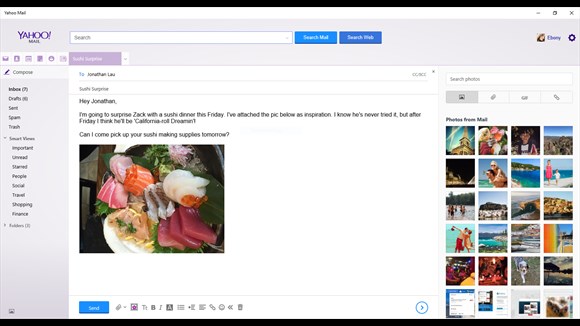 Yahoo is talking up the use of the Universal Windows Platform (UWP) in the Hosted Web App format for its new Windows 10 Yahoo Mail app, but it is worth asking whether it a universal app at all.

Universal Windows Platform (UWP) in the Hosted Web Format is a fantastic tool for developers to create new applications without having to start from scratch with new coding.

The Hosted Web App UWP format allows developers to use code they have already used on web based apps and port it as the base of their Windows 10 apps.

Yahoo’s new Mail application is a prime example of the UWP development in action, but on closer inspection, is the new app really universal?

The internet giant used the Hosted Web App format to build its new (admittedly slick) Yahoo Mail application for Windows 10, and explained the decision in a new interview. However, there seems to be a lack of a mobile version of the application, which means it is not a true universal app, at least not until the mobile port is launched.

A quick look at Yahoo’s video (above) detailing the Mail app suggests that a mobile version has been built, but not confirmed yet. Until that happens this cannot be classed as a “universal” app … no mobile build means it is not universal.

Away from semantics, Yahoo explained why it decided to build on existing coding using the Hosted Web App format, as opposed to starting from scratch with the standard Universal Windows Platform. Director of product management for Yahoo Mail, Josh Jacobson, spoke to the Windows App Team and said:

“We looked at what things we’re limited to in a browser and what things in a desktop app we could really utilize to help users return to Yahoo Mail and use it as part of their daily workflow.”

“The Windows Store itself, for us, was an awesome experience because users are prompted automatically to give reviews,” said Jacobson. “We didn’t have to do a lot of work to get users to leave reviews, and we got lots of reviews right away as soon as we launched.”