The company has shared information on category-wise app downloads for the October – December 2015 period, with Games being the most popular one.

For Q3/2015 Microsoft reported overall Windows Store visits of around 2.5 billion since the launch of Windows 10.

According to new data, this figure has now risen about 20% to more than three billion.

Games continues to be the most popular app-category and accounted for 32 percent of all downloads in Q4/2015, followed by Utilities & Tools at 15 percent and Photo & Video at 8 percent.

Microsoft highlights that “While Windows 8.x still accounts for the majority of Store downloads, Windows 10 users are the fastest growing download segment, growing both in volume and total percentage of downloads”. As we recently reported, Windows 10 has already officially surpassed Windows 8.1 and Windows XP with more 200 million downloads.

Looking at some charts shared by Microsoft about subcategories, we can see that almost 30 percent of games-downloads came from the action & adventure section, 14 percent from puzzle & trivia, and 12 percent downloads from racing & flying games.

Looking at which markets make the most app purchases and in-app transactions, the United States account for roughly one-third of all transactions, followed by the U.K., Germany, France and Italy with almost the same share. The biggest source of developer revenue have been in-app purchases (49 percent), followed by Microsoft advertising (37 percent) and paid apps (14 percent). 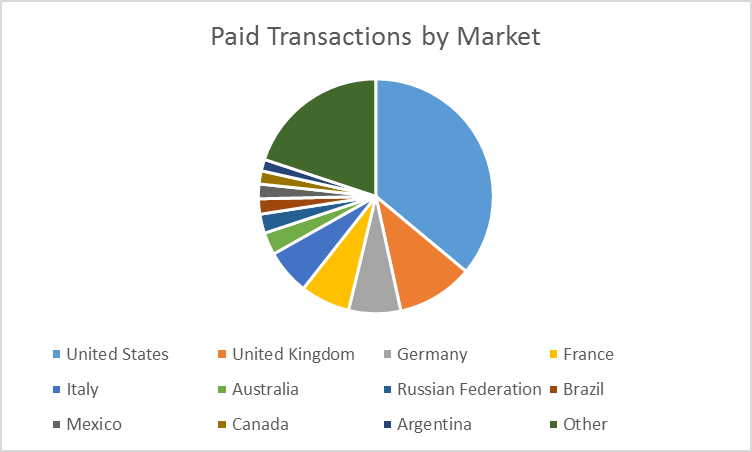 Microsoft also offers some stats about app-languages and the revenue made by developers through the Windows Store. Roughly one-sixth of all downloaded apps have been in English, followed by Spanish, Brazilian Portuguese, and Russian.