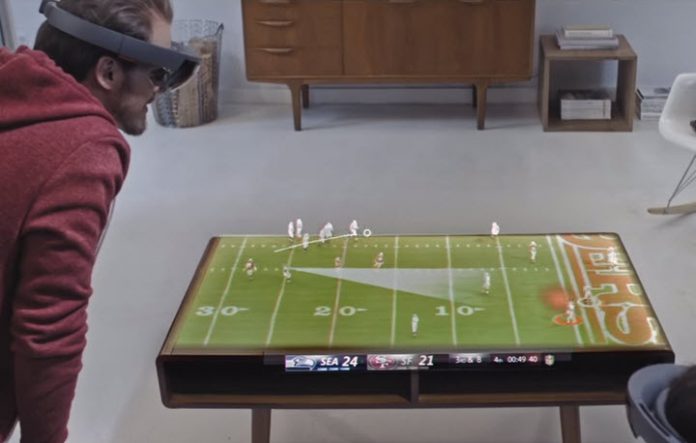 Microsoft has released a video which demonstrates how Hololens could one day enhance the game day viewing experience right from the user’s living room.

The concept video was unveiled at the Super Bowl 50 panel discussion, called “The Future of Football: How Technology Could Shape the Next 50 Years of the Game.”

The panel discussed the impact that technology has on the football field, and how Microsoft’s Hololens and the NFL could take the Big Game beyond the television screen.

“With HoloLens, running Windows 10, your favorite players could be brought to life through high-definition, 3D displays – allowing you to experience the athleticism and skills behind their stats.

That game-changing play could pop up as a 3D hologram so you could view the field from all angles, all while your fantasy scores update in real time, without the need for you to look down at another screen.”

During the Super Bowl 50 news conference, VP Brian Rolapp called it an impressive experience, that while you would stay in the room you would be in, with Hololens you remained self-contained in a virtual environment.

The concept video shows that the wearer gets a complete game day experience, with holograms of the stadium, life-size players, live fantasy football stats and a unique point of view. Joe Montana, the four-time Super Bowl champion was also a part of the Super Bowl 50 panel discussion, and stated that the technology in the game had advanced significantly since his playing days.

“In New Orleans when we played there, they would send the photos down. They had these big metal clips and a wire at the top, so they’d take a picture, put it on there and slide it down to our bench. Things have changed a lot with as fast as they get stuff on the sidelines and the different views, and the things that you can see are a lot better, especially, I would imagine, for the quarterback.”