WhatsApp has been owned by Facebook since 2014, and the social media giant is finally connecting itself to the instant messaging app.

The latest beta version of WhatsApp reportedly comes with a new option, that enables sharing of the user’s WhatsApp account information with the main Facebook service.

The change in WhatsApp’s terms of service was noticed and reported by Javier Santos, who used some terminal tricks to reveal the new policy. 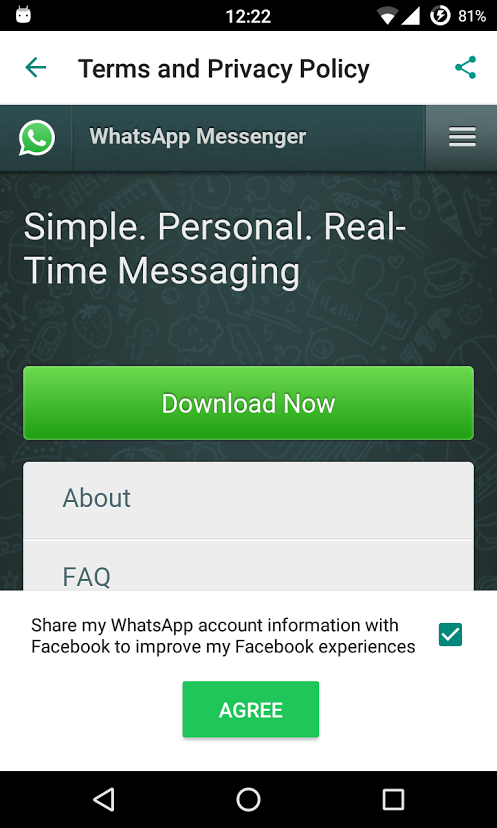 The policy change to “improve my Facebook’s experiences” is not the only major change that was revealed in the beta release of WhatsApp.

WhatsApp has added a new end-to-end encryption option in the security tab, which makes WhatsApp conversations more secure. According to reports from Android Authority, document sharing might soon come to WhatsApp, which could be a part of Facebook’s plan to make user’s communication with businesses much easier.

WhatsApp reached 900 million active users in September, and the latest revelation from Facebook will surely help it reach the 1 billion mark much sooner. Facebook has removed the yearly subscription fees of $0.99 USD per year, and will be offering the instant messaging services without any ads as well.

Facebook plans to connect users to businesses, which means that the users could use WhatsApp for “communicating with your bank about whether a recent transaction was fraudulent, or with an airline about a delayed flight”.

After two years of planning, it seems that Facebook’s intention of buying out WhatsApp is finally apparent.

Microsoft to Decrease Recruitment Across Windows, Office, and Teams