A video from Microsoft China explains the features of Continuum and lists Lumia Phone X, along with other Windows phones as supported devices.

A video from Microsoft China explains the features of Continuum and lists Lumia Phone X, along with other Windows phones as supported devices.

The Chinese division of Microsoft might just have slipped out the name of the next flagship Windows phone – all by an “accident”.

Microsoft China released a video on Youtube which explains the functionality of Continuum, a key feature of Windows 10 Mobile OS. Shortly after, the video has been removed again but it was there long enough to get copied by some bloggers.

Though the video does not reveal any insight on the design and hardware of the alleged Lumia X Phone, the description offered more details. There the model called Lumia Phone X has been listed alongside the current Windows phones capable to run Continuum– Lumia 950 / XL and Acer Jade Primo. 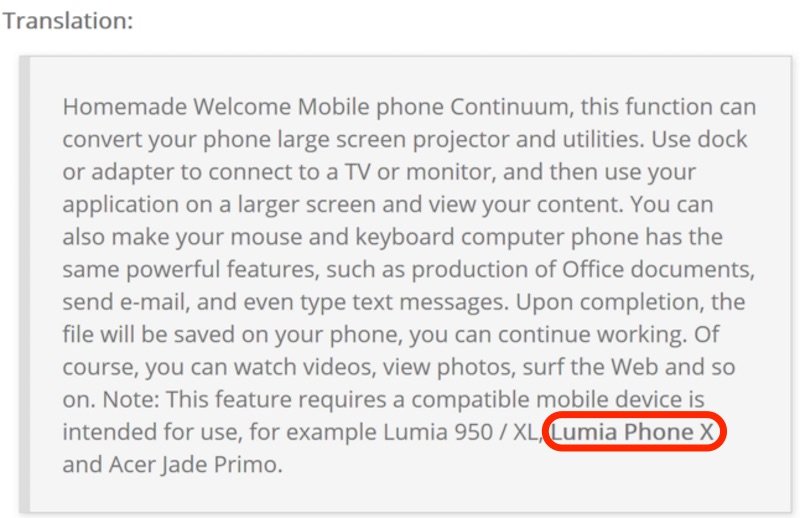 The video is a basic explainer of how the Continuum feature of Windows 10 Mobile enables the user to operate their smartphone as a PC when connected to a dock or wirelessly. Since the software requires the Windows phone to run the full version of Windows 10, the devices that currently support it, and the one that will support it in the future, must be high-end.

Will the Lumia Phone X be the last Lumia?

After re-branding Nokia Lumia as Microsoft Lumia, it was rumoured that Microsoft will write off the “Lumia” brand name for good. It was expected that the “Surface” branding would be the new face of Windows phones, but the inadvertent release of the Lumia Phone X is a mystery in its own.

The video posted by Microsoft China, listing an unannounced Lumia phone could either mean two things. Either Microsoft experiences a change of heart, or that the battered Lumia lineup will be ending with one last flagship Windows smartphone to its name.