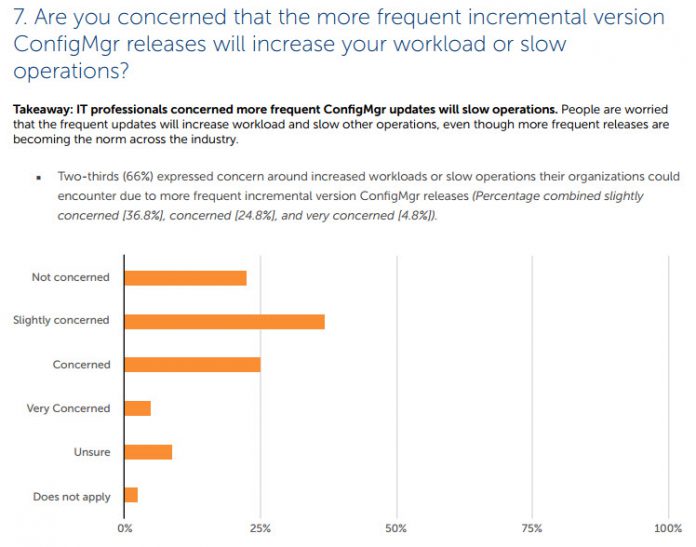 With the enterprise edition of Windows 10 in full swing, IT experts are feeling the heat of migration planning and upgrading the Microsoft System Center Configuration Manager. According to a survey conducted by Microsoft partner Adaptiva, many IT professionals are worried about the Configuration Manager upgrades.

The survey stated that 65 percent of the correspondents upgrading the SCCM were motivated to keep up with Windows 10 and a majority of them is worried about shorter upgrade cycles which might increase their workload substantially.

Microsoft has stated that the SCCM 2012 will stop keeping a track of the Windows 10 service branch updates, and will be soon discontinued in the ConfigMgr 2012.

The company announced that SCCM 2012 management products will stop supporting Windows 10 changes after February 2016. Although the IT professionals have been made aware of the upgrades required for quite some time, they continue to see it as a time burden. Although the survey conducted by Adaptiva wished to highlight that enterprises are adopting Windows 10 faster, it also concluded that:

“While Adaptiva’s survey indicates that businesses are rapidly adopting Windows 10 and ConfigMgr in 2016, it also revealed concerns about the time involved with managing the quick timeline for these new deployments and frequent updates required to keep up.

The majority of survey respondents (57%) said the anticipated time it will take to deploy the new version of ConfigMgr is posing the biggest barrier to adoption. Two-thirds (66%) of survey respondents expressed post-deployment fears that frequent updates of incremental Microsoft releases would increase workloads and slow operations.”

However, Microsoft claims that the upgrade will not be “wipe-and-replace”, but “in-place” upgrades, which should not be extensively time consuming. Microsoft has promised to release Windows 10 updates once per month, one per four months and again one per eight months.

Microsoft updates Windows 10 and System Center Configuration Manager as services, which means twice the number of upgrades. IT professionals are concerned that it will not only increase their workload, but dampen their overall IT operations as well.