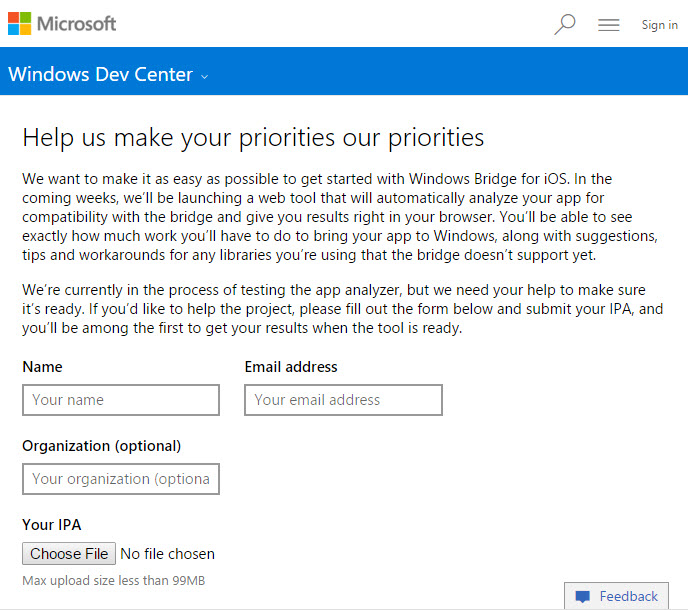 Microsoft wants to boost App development for Windows with an iOS bridge that helps to port iOS apps to Windows.

As a Tweet by a Ben Riga, a member of Microsoft’s Developer Experience (DX) group reveals, the company is indeed working on such a Windows Bridge for iOS which is said to be called Islandwood inside of Microsoft.

According to the page on Microsoft´s Windows Dev Center, Microsoft wants “to make it as easy as possible to get started with Windows Bridge for iOS”

“You’ll be able to see exactly how much work you’ll have to do to bring your app to Windows, along with suggestions, tips and workarounds for any libraries you’re using that the bridge doesn’t support yet.

We’re currently in the process of testing the app analyzer, but we need your help to make sure it’s ready. If you’d like to help the project, please fill out the form below and submit your IPA, and you’ll be among the first to get your results when the tool is ready.“

The coming app analyzer is in testing at the moment, but those interested in trying out the tool can sign up now through Microsoft’s site to be one of the first to get results from it.

As Mary Jo Foley writes on ZDNet, “The Windows iOS bridge relies on an Objective-C development environment for Visual Studio to help iOS developers build Universal Windows Platform apps.” Microsoft has already open sourced andmoved an early version of the code for that bridge to GitHub in August 2015.

Microsoft is also working on other bridges like a Web bridge for Windows 10 called Westminster and project Centennial, which aims to help developers package and publish existing .NET and Win32 apps to the Windows Store.