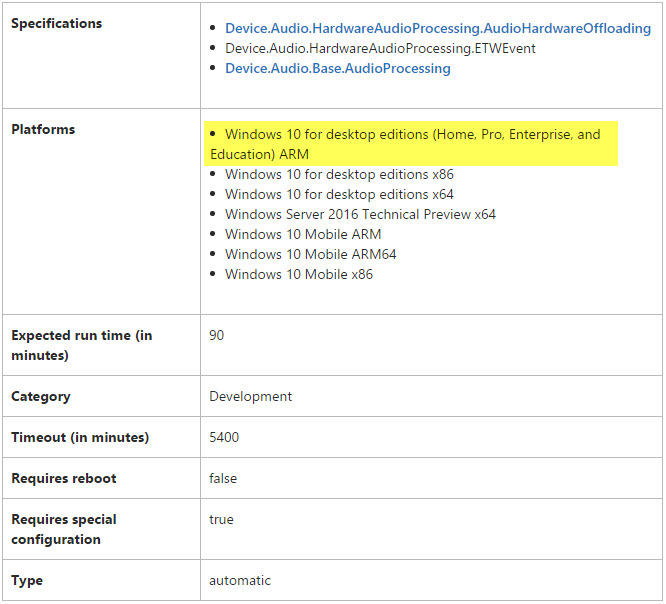 Microsoft´s Hardware Dev Center has listed an ARM based desktop version of Windows 10. After the failure of Windows RT this might be a sign that the company has not yet given up about alternative chipset architectures.

The listing has been spotted on a Windows test page for the Audio Engine Core Test (UMACoreTest), which is a test that validates the audio engine and its interactions with the operating system´s audio driver.

Apart from the existing platforms, the test names also Windows 10 for desktop editions (Home, Pro, Enterprise, and Education) ARM as a supported platform.

While this is no proof that Microsoft is planning to release ARM based versions of Windows 10 anytime soon, the company is obviously playing around with an ARM version of Windows 10 behind the scenes. ARM architecture is very popular for mobile devices because of its energy efficiency but it lacks the ability to execute code written for Intel´s x86 processors which includes the majority of classic Windows desktop programs.

Windows RT, the last desktop based ARM adventure of Microsoft had been a big failure. While the system offered the appearance and functionality of Windows 8, it came with substantial limitations. Windows RT was only able to execute Windows Store apps made for Windows 8, but at that time there were not a lot of quality apps available.

However, with its Universal Apps strategy the company is doing a big effort to bring the whole Windows ecosystem under one umbrella, where apps written for one device can be easily ported to another platform and architecture. This includes offering adequate development tools such as a new converter that allows to transform Windows Phone Silverlight Apps into the Universal Windows App format.