Vodafone clients will not be able to upgrade to Windows 10 Mobile. As the company says in its weekly status listing for Software updates, The Lumia 630 has been removedf rom the Windows 10 update program.

Vodafone, which is one of the largest operators in Europe has not given any explanation for the decision. Given the low popularity of Windows Phone, the company might have decided to save some money by not providing the Upgrade. If they don´t have a lot of customers running the Lumia 630, this might make sense for them.

The decision gives a hint about how Windows 10 Mobile is being rolled out in the end. Windows 10 Mobile has been rumored to not need carrier approval, but based on what we see Vodafone´s Software Update Weekly Wrap this might not happen.

For the devices Lumia 640, Lumia 640XL,Lumia 730 and Lumia 930, Vodafone shows the entry Testing in progress for Windows Phone 1o, as they mistakenly call the upcoming Windows 10 Mobile upgrade. This, together with the drop-out of the Lumia 630 suggests that like in the case of Windows Phone 8.1 Carriers will handle the upgrade process once the upgrade is here. 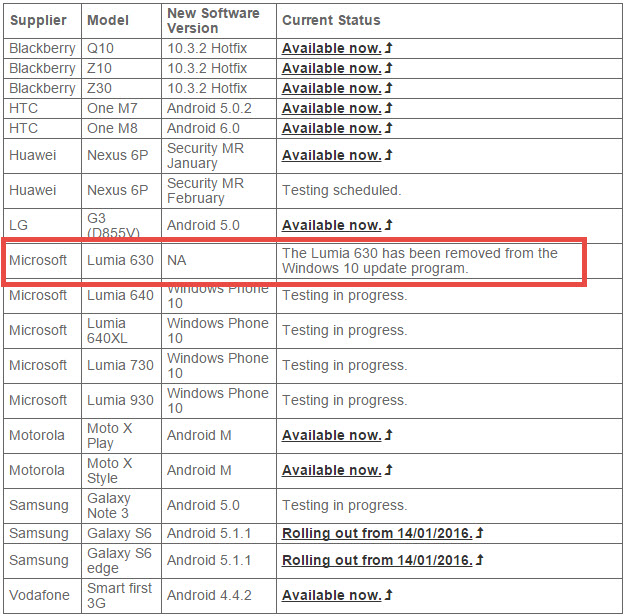 Microsoft has officially included the Lumia 630 into the list of supported Models for the Windows 10 Mobile Insider Preview. We don´t know of any specific technical issues that might have led Microsoft to remove it from the upgrade program.