German phone maker Shift has dumped plans to build its SHIFT5+ in favor of a more powerful SHIFT5Pro. The 5 inch phone will feature the Snapdragon 820 CPU a higher than 20MP camera and USB3 Type C connectivity. With the SHIFT12, a Surface like tablet is also under development.

The Shift5Pro will be based on a modular approach, which means easy replacement of battery, memory and other components like broken displays. This focus on sustainability motivated SHIFT to go for a much better version of the previously announced Shift5+.

As SHIFT founder Carsten Waldeck reveals in a post to crowdfunding-supporters, their current CPU partner MediaTek was unable to guarantee long-term support for software updates. “That´s why we´ve decided to use Qualcomm CPUs for our coming devices, the only way we can provide the sustainability which is so important for you and us”, Waldeck explains.

Previous plans to use Snapdragon 801 in the SHIFT5+ have been dumped as it does not support USB3 Type C. That´s why SHIFT in the end opted for the much better SHIFT5Pro high end model based on Qualcomm´s Snapdragon 820.

The SHIFT5Pro, which is currently available for preorder at 377€ will come with high-end features which are hard to find in other Windows 10 Mobile phones apart from Microsoft´s Lumia 950/Lumia950XL.

The device will be optimized for the Cyanogen Android mod and support Windows 10, Android 6 Marshmallow and the upcoming Android release.

With 4GB RAM, 32GB internal storage and SD-card support the SHIFT5Pro will offer plenty of space for apps, music, videos and photos.

SHIFT also promises a high-end camera with more than 20MP and very good optical capabilities. The display will use at least Gorilla Glass 3.

The outside look and dimensions of the SHIFT5Pro will be similar to the existing SHIFT5.1 model with 144 x 72 x 7 mm and 140g. It might be less slim and a bit heavier though as battery capacity will be higher, between 2500mA and 3000mA.

The specs we know so far reveal that the SHIFT5Pro will be more powerful than Microsoft´s current top models and that at a very competitive price. A faster CPU and more RAM will catapult this phone in the top line of Windows 10 Phones once it arrives on the market.

As users might later choose to switch between Windows 10, Cyanogen or the latest Android version, users will not have to fear getting stuck with Windows 10 Mobile if they don´t like it.

The maybe weakest spot of the SHIFT5Pro will be its display. The Lumia 950/Lumia 950XL offer state of the art, and you can expect that SHIFT will spare some bucks here.

SHIFT founder Carsten Waldeck did just tease the topic and did not share any technical details. But from what we have seen already from SHIFT, the idea looks promising.

The business concept of SHIFT is based on sustainability as known from the Fairphone. The existing and crowdfunded models have been created with that concept in mind. 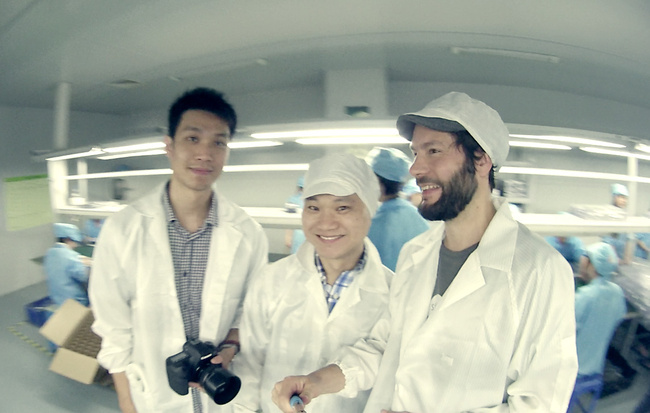 They have started their own YouTube Channel with tutorials about how to repair or replace any part of their phones.

How to report and the start of the new year back and have a lot to tell ;-): A small retrospective: 2015 was for us an exciting and eventful year. Through your support, we were able to realize the SHIFT7 and the SHIFT5 / SHIFT5.1. And the SHIFT7 + is nearing mass production. But we could also ensure through you that it all goes well who are involved prepare our equipment and thus the SHIFT PHONES finished fairer than ever before. This time we have also filmed something and be in the next few weeks cut together a little movie for you, which gives you a little bit in the whole thing look.

What’s next:
Now we start in 2016 and we want to give an outlook how it goes now:

In January will now start the mass production of SHIFT7 + devices. So hopefully most in Jan / February 2016 can keep their Shift7 + in his hands.
The plan the SHIFT5 + mid-2016 was then to have done for you and early 2017 the SHIFT5pro. During our recent visit to China in December, we have decided not to implement this plan so. We believe it is better to build a SHIFT5 +, but instead equal to the much better SHIFT5pro.

And here’s a little insight into our development department: We are currently also working on a SHIFT12. That’s (similar to a surface) a notebook / tablet combo.This is now only 2016 Whistleblowing … please not löechern us with detailed questions … we will deliver the information to then already, if it is good and useful :-). But it is a very cool part … that we can say already now; -) …

Also we have received feedback from you that I wish you an even smaller SHIFT PHONE. This desire we would like to meet you in the form of a SHIFT4 which you can pre-SHOP in the near future, and the mid-2016 will be delivered.

Why not SHIFT5 +:
it Let us explain briefly: In addition to the fairness and sustainability, we indeed very important to this but we can not as we wish it to us with equipment on MTK-based (ie those with MediaTek processors) reach. Unfortunately, we get from the company MTK not the necessary support in order for the devices to ensure software updates over the long term. And so we opted for the next device to use the processors from Qualcomm only way to sustainability is important to us and you now achieve much better. We hattem considered for SHIFT5 + possibly a Snapdragon 801 to use (these uses, for example, the new Fairphone2. However, this processor is not able to properly support USB3 Type C (what us but is very important because this is the future is) and a few other things. Furthermore, we have learned a lot and also some new partners brought on board, which puts us in a position to build much better phones than we would have thought possible a few weeks ago. That’s why We would like to now focus on developing our high-end model in the coming weeks prefer a really good Shift5pro solid as quickly nor SHIFT5 developing + to the end with the knowledge that it and us is not really the best for you.

What will the SHIFT5pro:
subtleties are subject to change (for the better), but the basic data look like this:
It is very modular, which means you can not only, as previously Replace battery and memory very quickly, but also the display and Various other important components.It will use the 2016 new high-end processor appearing Snapdragon 820 and use the USB3 Type C. Thus we optimize the SHIFT5pro for Cyanogen, but also normal Android (6 or 7), and Windows 10 can be used optionally. The Qualcomm® Snapdragon ™ platform, we then have more opportunities to provide faster software upgrades for your disposal. The SHIFT5pro is a 4G Phone, very energy efficient (MSM8996), has at least 4GB of RAM and at least 32GB of internal memory (expandable via naturally also SD card). Very much love we put in the camera. This is more than 20MP, a very good appearance, and have a high dynamic range. The SHIFT5pro gets Gorilla Glass 3 (or better), and is very resistant. Visually, it is very similar to the SHIFT5. The battery will be much larger and have 2500-3000 mA.Exact information can be found soon to our website and at the shop.

What does this mean for you SHIFT5 + Supporter?
First of all we would like to again thank you for your patience and support gigantic. Without you it would have been impossible to reach this point. You are important to us and we take responsibility towards you very seriously. That is why we do not leave you out in the cold. On the contrary, because we want to be rewarded the loyalty and trust ;-):

All SHIFT5 + Supporter receive the new (much better!) At no extra charge !!! SHIFT5pro In addition, there is a transitional program, so that everyone can get Supporter SHIFT5 + hire a SHIFT5.1 or even a SHIFT4 as an intermediate device from February 2016th Then, when the SHIFT5pro is there, you can simply switch the power on again. Depending on how you have cared for the intermediate device, you pay then when you upgrade for a small, symbolic usage fee of EUR 22-77. We hope thus to find a good solution for everyone. If someone is not satisfied with it but we can not find any common solution, everyone has the possibility of the support back and recover his money.

No sustainability for other devices SHIFT?
The fair with the production we have achieved and that’s worth a lot to talk.However, we will ensure the sustainability of the existing devices. We remain at MTK regarding it. Other software updates for existing devices. If this does not succeed, we will ensure the sustainability in the form of hardware upgrades. This means that if someone wants to have a SHIFT PHONE with a newer version of Android it can send us back the old unit and receive a new model for an additional cost. The old device we bring again in use as a tested hand goods, for educational projects, refugee work, or similar funding projects. Defective devices are disassembled and recycled and no longer usable parts recycled. For us nothing is thrown away or disappear in drawers.

Our goal:
We want it all goes really good people who are involved in it, that you can use a beautiful and mature the SHIFT PHONE offers you maximum freedom. For this, we continue to need your support. Especially for the development of SHIFT5pro we need as many supporters as never before (an estimated 10,000). We now begin the SHIFT team a new section, which we are very happy and we are excited about what is going to happen so in 2016.
Ok, so far as only times. We were very busy in the last weeks and months and are now for a few days as a team in the mountains (Yay! WE have massive snow !!!).That is why we are this week not as quick with the answer of mail etc …

We thank you for your trust and support and all are very happy when we look back on the old year and can only be amazed at what has grown everything in such a short time and are looking forward even more to a really crass 2016 you !!! Much love and our best wishes for the new year !!
Carsten and the SHIFT team.”