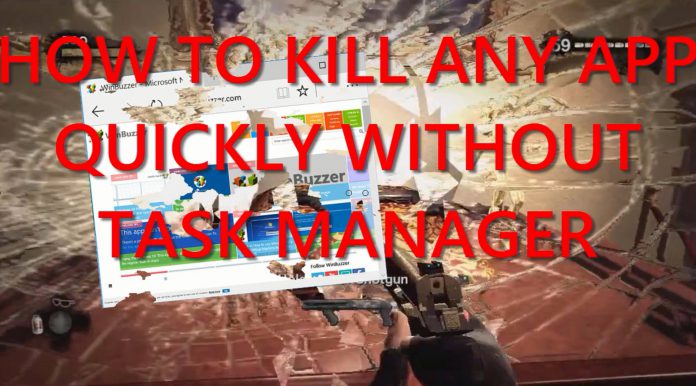 You can kill any Windows app without opening Task Manager using our little trick. Just place a little kill button your taskbar and you can kill apps with just two clicks.

Yes, Windows is now more than 30 years old but freezing programs are still something we have to deal with. Not very often anymore but yes, it still happens.

The classic way to kill an app would be to open Task Manager with CTRL + SHIFT + ESC or via the right click start button menu. Then you would search the process, right click on it and finally kill it by selecting End Task.

For power users this is way to complicated! Microsoft should have added an easier way, but when it comes to kill processes we still have to apply the same steps as more than ten years ago.

What I use instead is a little kill button on the task bar. See it in action in the video below.

Kill.exe is asmall portable freeware from Donationcoder of just 205KB size which does not need to be installed. You can just drag it to your task bar and kill any window process with just two clicks.

It identifies the related process ID of a windowed process automatically and kills it directly.

The nice thing about it is that it also works on tablet computers without any attached keyboard. On such systems the launch of Task Manager is usually even more annoying as no hotkey combination can be used.

You might however not see the Skull logo in plain touch mode. But killing a Windows app is as easy. Just tap once on the Skull logo and then on the Window which you want to kill.

Windows 8 introduced this nice sliding down feature to close Modern UI apps. It is a pity that Microsoft has not found a way to offer that feature for all kind of Apps in Windows 10.