Program Manager Milad Aslaner from Microsoft has showcased the Custom UEFI Interface Microsoft built into the Surface Pro 4 and the new Surface Book. The built in UEFI allows managing hardware directly without rebooting your device.

Unified Extensible Firmware Interface or UEFI is a standard programing interface for booting a computer. It evolved from EFI interface developed by Intel, and has already replaced the previously common BIOS startup system.

In the Channel9 episode Nerding out with Surface Book, Principal Program Manager Simon May had in in-depth conversation about the advanced technology Microsoft developed for its latest premium Windows 10 devices.

After taking about the Surface Pro 4, Surface Book, Windows Hello, and the Surface Pen, Milad Aslaner went on to talk about Microsoft´s new custom UEFI. According to Aslaner, initially their framework had not been as fast as they wanted. So, they hired very talented developers and Program Managers and to develop and integrate their own UEFI into Windows 10.

According to Aslaner the “framework wasn’t as fast” and they “couldn’t prototype as fast as [they] wanted to.” For that reason Microsoft decided “invest in that area” and to hire “very talented people” to build a custom UEFI “which follows UEFI specifications and includes all those enterprise capabilities which we knew about the Surface Pro 3 or Surface 3 Story”

UEFI Settings can be managed with Windows 10

Moving ahead, he showed UEFI setting on his own Surface Book, which included options for Security, Device Configuration, and Boot configuration. Another sections shows PC Hardware information.

The PC information section shows important information like the Surface’s universally unique identifier (UUID), serial number, and firmware version. This information is helpful for troubleshooting or working with warranty support.

In the Surface UEFI Security Settings you can add or change the UEFI password, configure Secure Boot or activate the Trusted Platform Module.

Before booting Windows 10, the Secure Boot feature in the UEFI firmware validates the operating system loader and its drivers to ensure they’re signed with an approved digital signature. For Windows PCs Microsoft or computer manufacturers take care of the signing process.

With the Trusted Platform Module you can encrypt and password protect your hard-disk using BitLocker or similar software.

In the Surface UEFI Devices settings you can turn off the following integrated devices without the need to reboot your system. This helps you to safe energy and/or increase the security in different scenarios. 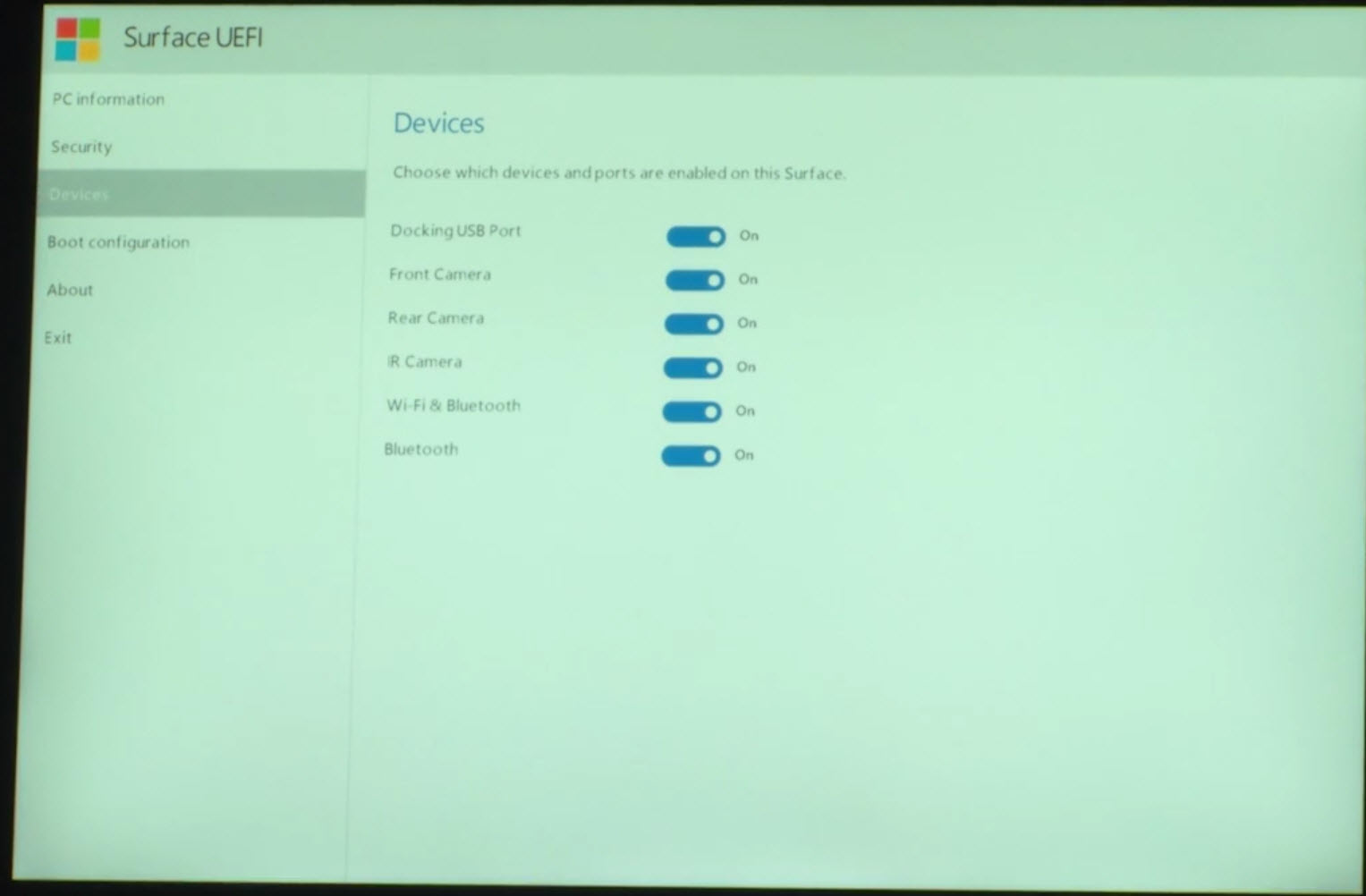 Also the boot configuration can be changed using the new Surface UEFI. With drag&drop to change the boot order and checkboxes this is an easy task.

There is also an option for an alternate boot sequence which might be helpful for multi-boot scenarios. The IPv6 for PXE Network boot option can be managed by the Surface UEFI as well. 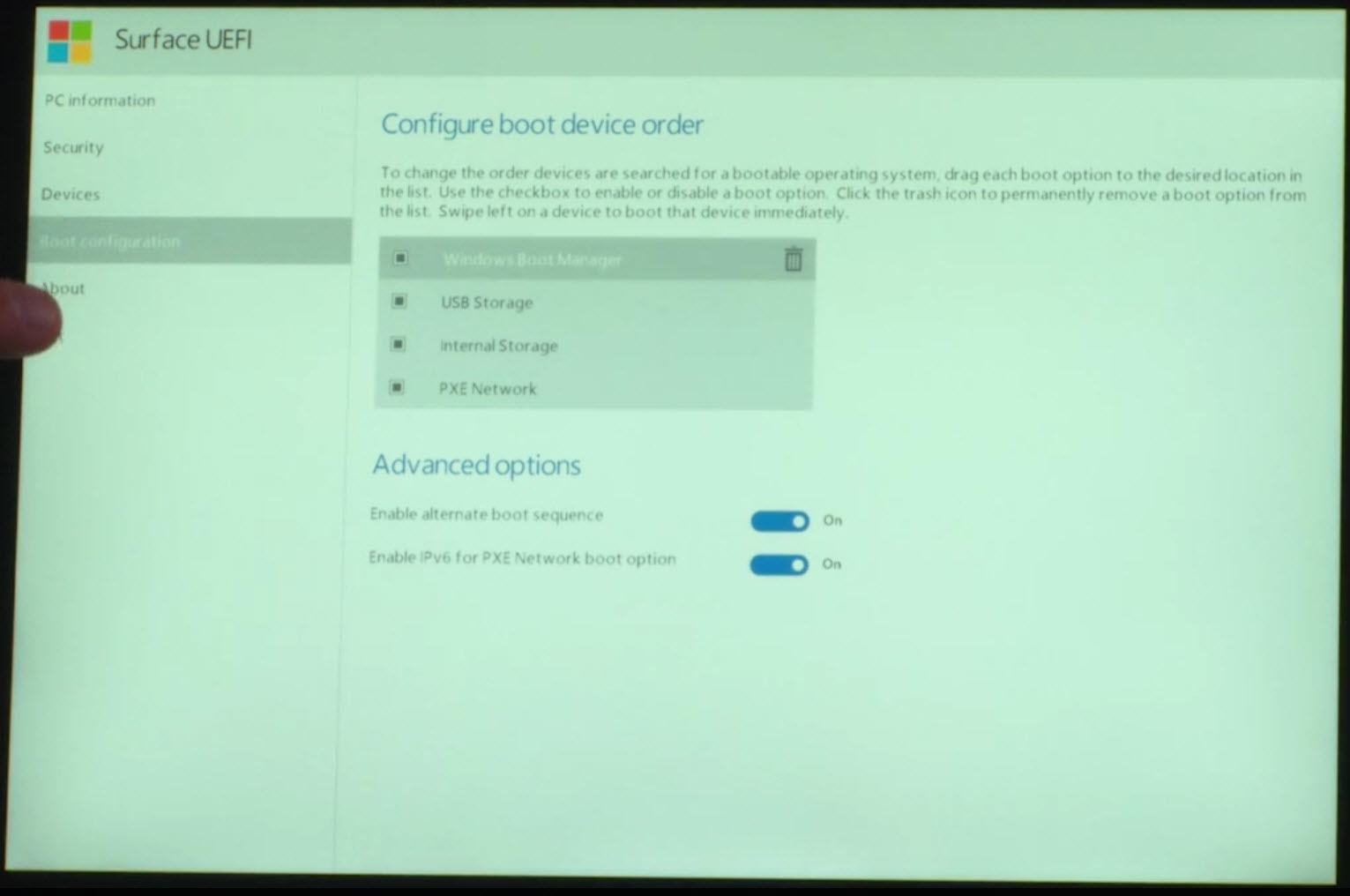 While changed settings still require a reboot, the Surface UEFI is still very helpful. Entering a UEFI can be a painful task sometimes as you usually need to press certain hotkeys at a very specific moment. On the Surface Book and the Surface Pro 4 you just can change it from inside the system which is much more convenient.

Also checking the current options is possible. So if you don´t remember what you selected, you can just enter the Windows 10 settings and have a quick look.

Here the complete talk with Simon May and Milad Aslaner.

Microsoft Announces What’s Next for Windows Event Later this Month

How to Enable or Disable File Encryption in Windows 10 (NTFS...

How to Clear the Clipboard in Windows 10 with a Shortcut

Windows 11 Will be A Free Update for Windows 7 Users

This Is Windows 11: All the Major Features Coming Our Way