A new feature grants web-based access to app diagnostic tools and the ability to sideload apps into smartphones running on Windows 10 Mobile.

Unlike iOS and Android, Windows Phone so far has been a fully closed OS without hacks and unofficial App-Stores. A new possibility to sideload Apps into Windows 10 Mobile might change that soon.

In normal course of action, apps on Windows 10 mobile devices could can be installed only through the Windows Store. It imposes certain restrictions on developers who wanted to install non-store certified apps for testing purposes.

With the new device portal and sideloading functionality, developers will be able to get rid of this limitation quite easily. The necessary developer options were first found unresponsive under the nondescript label “USB EEM” in Windows 10 Mobile Build 10536. 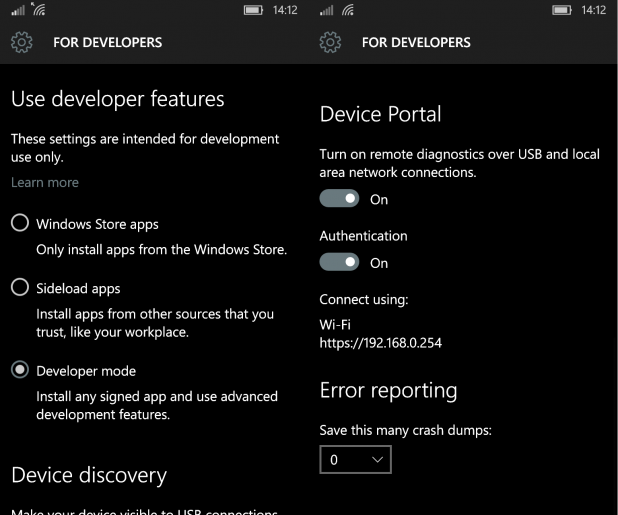 By using this feature, developers can install and run any Windows 10 Mobile app on Windows 10 mobile-based smartphones by compiling and bundling it into an .APPX file.

Along with this, the new device portal conveniently transforms the device into a diagnostic web-server as well. It allows browsers from other devices to “browse” to the IP address listed on the developer device, and gives analytical report and information about the targeted device. The information in the resulting page includes everything, from running processes and memory use to CPU and GPU usage.

The new device portal is almost identical to a web-based setup program of a standard Wi-Fi router. It works just like a typical router, and protects the information projected by the developer device through a PIN which can be accessed only by the developer. This feature is also useful for developing teams as it allows multiple computers to diagnose a single developer device in real-time.

As of now, the device portal is limited in nature. But, considering its usefulness, it wouldn’t be a surprise that power users, hackers, and IT administrators find it quite interesting. It’s an ideal tool for developers, but it still remains to be seen whether its added in the RTM build or not.