Quantcast, an online measurement company has said that a large number of Windows 10 users are backing away from Microsoft Edge browser. Google Chrome maintains its position as  the most popular browser on Windows 10.

The default browser packed with Windows 10 got an early boost with the launch of new operating system. But in a matter of weeks, its usage share in the US dropped from 16% to 12%. Google Chrome, on the other hand, leads dominantly with a share of more than 70%.

San Francisco based Quantcast, measured web traffic at more than 100 million websites to deliver advertising data to brands and different publishers. They can mine this data to determine browser and OS usage share on the basis of website visitors and views.

As a result of this, a software engineer from Quantcast, Jackson Newhouse claimed that Microsoft Edge has failed to take on Google Chrome’s domination. He said that the 70% share of Google Chrome on Windows 10 was even more than Windows 7 and 8, where the browser accounted for 63% of activity. The share of Mozilla Firefox was also more than Edge, while Internet Explorer accounted only for a share of 5% on Windows 10. 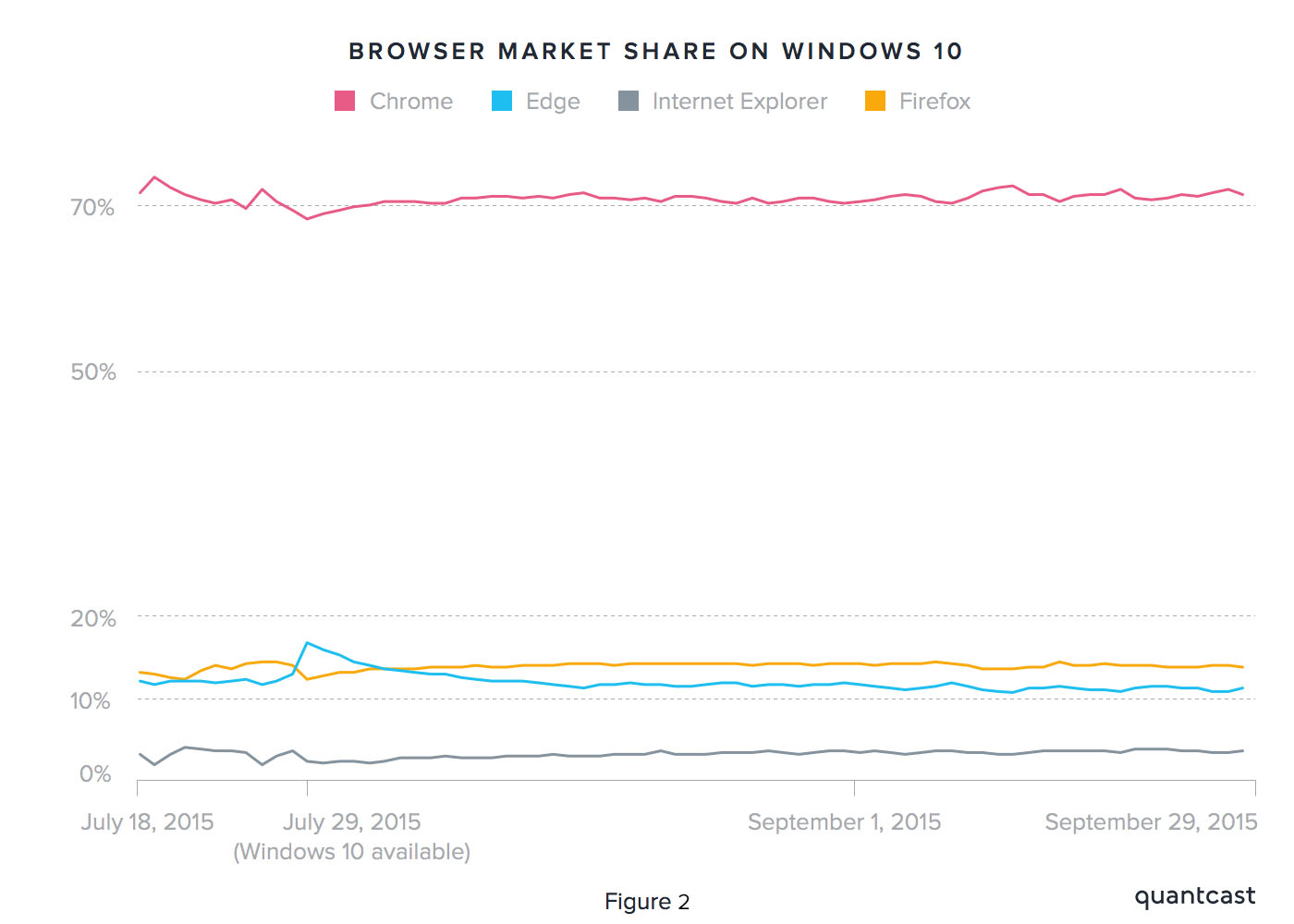 StatCounter conducted a special analysis of the take up of Edge by Windows 10 users. It found that Edge usage on Windows 10 peaked at 20.1% on 30th July, the day after the global launch, but fell back to 14.1% on the 31st August.

“Windows 10 came out of the traps much faster than Windows 8 and also exceeded the launch of Windows 7,” commented Aodhan Cullen, CEO, StatCounter. “While it’s early days, usage of Edge by Windows 10 users has fallen by six percentage points from its peak the day after the global launch.”

The following table shows the web-browser usage changes of the last month as measured by StatCounter.

Microsoft Edge not being able to take on rival browsers on Windows 10 is quite surprising. The company has promoted Edge during the Windows 10 upgrade setup, and the upgrade from Windows 7, 8, or 8.1 swapped in Edge as the default browser, unless the user intervened.

Maybe the reason behind Edge’s decline is its unfinished status. Although Microsoft has promised to add more improvements by the end of this year, the browser currently lacks a bunch of elements including support for add-ons and syncing across devices.

If the downfall continues on Windows 10, Microsoft will reap lesser revenue from search advertising from Bing in coming months.