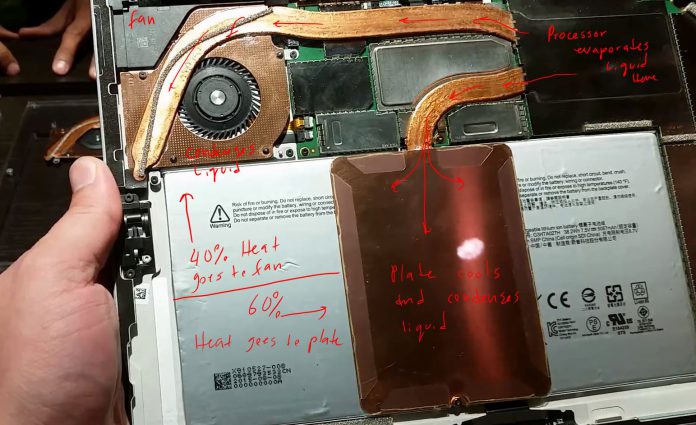 As Microsoft revealed yesterday, the new Surface Pro 4 uses a new hybrid liquid cooling system. A Reddit user who had an in-depth conversation about the new technology now explains how the hybrid cooling works.

Sean Ong, a Senior Engineer at EMI Consulting working in the field of Renewables and Environment has shared the following image on Reddit and Twitter. In a comment Sean Ong shares some more details about the functioning.

“Ok, this was an awesome conversation with the Surface engineers! The SP3 had all the heat concentrated in one spot (that hot spot in the corner).

The SP4 actually boils/evaporates liquid inside a metal tube that touches the processor, and that vapor travels to two places inside the SP4 to condense back into a liquid: one to the fan, and the other under where the kickstand normally rests.

The one under the kickstand allows the fan to rarely run, unless under extremely demanding tasks. So for web browsing, and normal day-to-day activities, you’ll no longer have the fan run as you did in the Surface Pro 3.

And when the surface is under pressure with the fan running, the heat will be more evenly distributed – not all concentrated in a big hot spot – making the SP4 feel a bit cooler.”