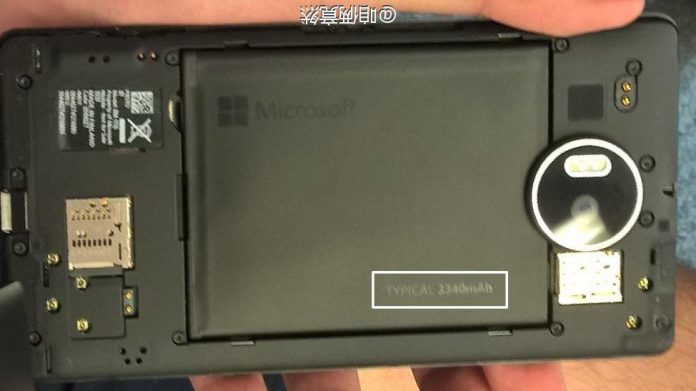 With no time left for Microsoft’s official launch event, a new leak has shown up revealing removable back plate of the upcoming flagship phone, Lumia 950 XL. Popular tipster Steve Hemmerstoffer aka onleaks has posted a new image showing off Lumia 950 XL with a removable 3340mAh battery.

The image posted highlights a battery branded with Microsoft and an capacity of 3340mAh. The event is scheduled for Tuesday, and now, this is another piece of confirmed information on the alleged big-screen phablet.

The ability to remove battery was the biggest highlight of Galaxy lineup until now. Swappable batteries could be replaced easily with new ones from the company. It is an extremely useful and handy feature, but in recent times, smartphone manufacturers are moving away from swappable back panels and removable batteries to due to design complications. They’re reducing thickness of premium smartphones by bringing non-removable batteries.

However, with the Lumia 950XL, a removable battery will be a major plus point against renowned flagships with non-removable batteries. The device is speculated to show up with a 5.7-inch quad-HD AMOLED display powered by a Snapdragon 810 chipset, coupled with 3GB of RAM. As per recent leaks, the phone will come with 32GB of on-board storage, will come 20MP rear and 5MP front-facing shooter, and will include USB Type-C reversible connector as well.