Office 365 component Delve,  Microsoft´s information discovery tool for teams and organizations adds with Praise a mix of Facebook like, Comment and recommendation feature. Favorites and a new authoring canvas to edit and view pages make the tool more useful.

Delve forms part of  Office 365 Business since its roll-out 2014. Being interconnected with Outlook, OneDrive and SharePoint it provides access to information that is most relevant for each person based on the work they are doing and the people with whom they are engaging.

The new Praise feature allows to send publicly viewable praise to your colleagues. The Praise appears in Delve on the employees profile and with a Like button colleagues can furthermore increase the recognition. Thanks to an automatic e-mail, direct managers will also get informed.

Office Delve Praise is rolling out in the U.S. for Office 365 First Release customers today, other Office 365 commercial customers will get it in the near future. Microsoft has shared the following animated gif to demonstrate how it works.

Blogging to Sharepoint with a new editor

The new authoring canvas allows quick creation of rich documents which can be shared in the corporate network or directly published as blog posts on the intranet.

As it is integrated across Office 365, it supports embedding documents inline from OneDrive for Business or SharePoint Online Document Libraries and videos from the Office 365 Video portal. An integrated player allows inline playback of embedded clips.

The Office Delve authoring canvas is rolling out to all eligible Office 365 commercial customers today. Microsoft has published a short video about it where you can see a demo.

With the new favourites feature, Delve users can pin-save every kind of information from the activity feed. The favorites are collected in a new ME-tab on the personal profile and use a tile-format with titles and thumbnails. 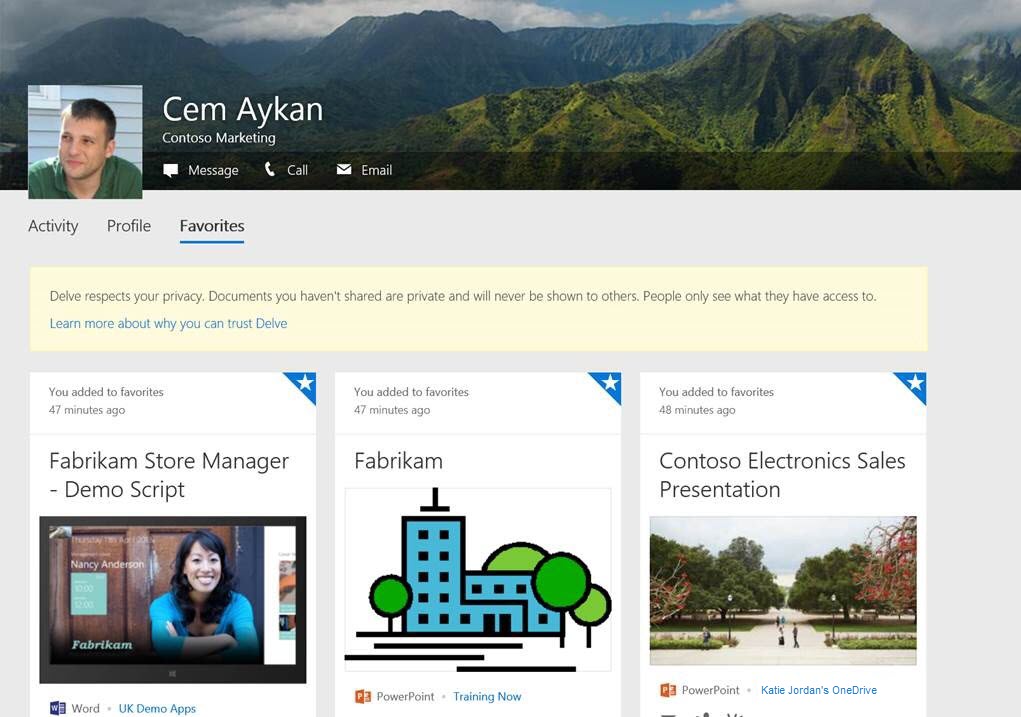 Microsoft promises to improve Delve further in the future and asks for ideas via the Delve UserVoice page. Get in touch if you have a burning hot new feature in mind which should be added.